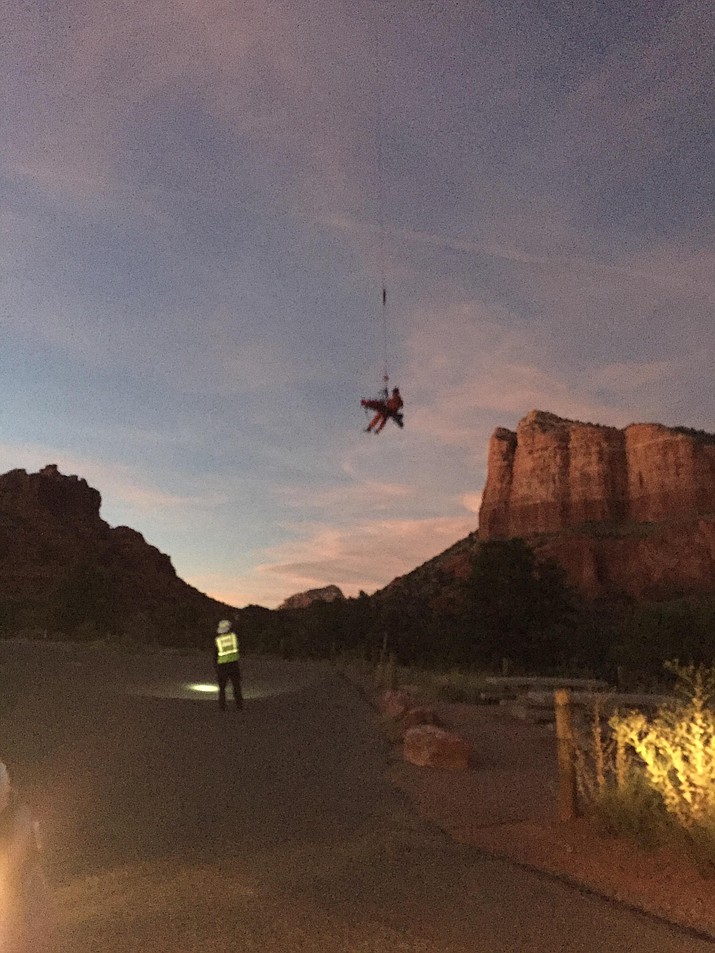 VILLAGE OF OAK CREEK – Emergency crews performed a short haul technical rescue Tuesday evening to save a critically injured female hiker located near the top of Bell Rock near the Village of Oak Creek.

Around 5:11 p.m., Sedona Fire District (SFD) personnel were dispatched to a mountain rescue in the Bell Rock area of the Coconino National Forest near the Village of Oak Creek.

While initial reports indicated the woman was near the parking lot, it was later determined through a Japanese interpreter that she was actually near the top of Bell Rock and sustained several critical injuries, according to a news release from SFD.

With the help of a family member who hiked off the mountain, SFD personnel from the Village of Oak Creek Station No. 3 were able to locate and access the patient, and begin treatment of the critical injuries.

Due to the severity of injuries, decreasing daylight, and the difficult access by ground, a short-haul rescue using a helicopter was determined to be the quickest and most appropriate method of moving the patient from the steep area of Bell Rock, said SFD.

Department of Public Service (DPS) Ranger out of Flagstaff responded to the scene and, with SFD Firefighter Kyle West on rope, performed the short-haul rescue.

The victim was flown off the mountain and transferred to a waiting medical helicopter where the patient was taken to Flagstaff Medical Center for treatment of her critical injuries. All remaining rescue personnel hiked off the mountain and the mission was completed by p.m., according to the release.

A short-haul rescue requires a helicopter to maintain a hover over or near the incident while a rescuer and patient are secured under the helicopter to a 150-foot rope. SFD personnel train with the Department of Public Service Ranger helicopter officers on the regular basis throughout the year and currently have five qualified Helicopter Rescue Technicians on staff that can perform these difficult and complex rescues.