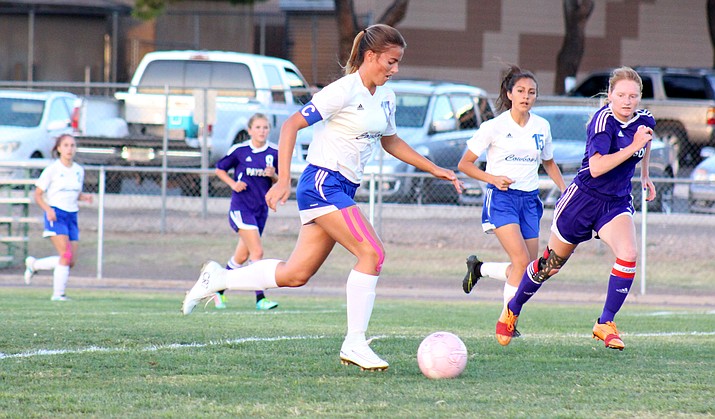 Camp Verde senior Alden Teeters dribbles past the defense en route to scoring in the Cowboys’ 6-0 win over Payson on Thursday. Teeters was one of five goal scorers for CV against the Longhorns. (VVN/James Kelley)

“The girls played really well,” said Camp Verde assistant coach Maddy Reay. “We got to get the younger girls in. I really like getting them some experience and playing time, so that’s really good.”

After jumping out to a 5-0 lead in the first half, Camp Verde changed things up in the second period.

“We put a lot of our younger girls up front,” Reay said. “We kept our defense pretty much the same but got the chance to have some girls who haven’t had the chance to play as much. So pretty much midfielder and strikers were different.”

The Cowboys have also won five of their last six games, outscoring opponents 20-4 during that span.

After Camp Verde lost 2-0 to No. 4 St. Johns at home in the second game of the season, they started the unbeaten streak, including a 1-1 draw against St. Johns at the Show Low Invitational. 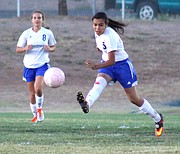 “I think we have matured since the loss,” Reay said. “We had a really, really good tournament last weekend. I think we grew a lot as a team and I think we improved on a lot of little things in our game and so I think that we’ve just started to mature a little bit.”

Up next for the Cowboys is a trip to No. 1 Northland Prep on Sept. 26, followed by the Old Pueblo Soccer Classic in Tucson starting Sept. 29. Their next home game is Oct. 3 against No. 3 Chino Valley.

Reay laughed when asked who’s been playing for Cowboys.

“It’s hard to pick (laughs),” Reay said. “Tyra’s been playing very well up front. Alden, our whole defense plays solid all the time. Our defense is fantastic Brina (Church) when she can get in, she’s recovering from a strained muscle unfortunately, but honestly they’re all, I can’t pick a player. They’re all playing well.”