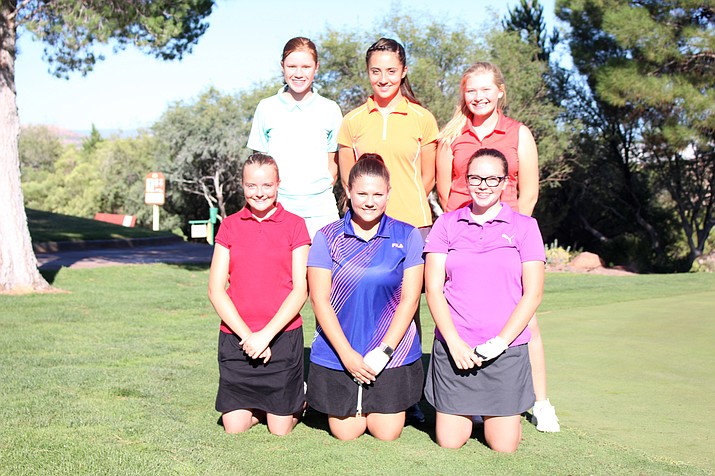 Mingus Union’s ladies golf team is not only pioneers but winners.

With the Marauders set to play their first ever-home match on Monday, they’re racking up win after win.

“The girls have been doing phenomenally,” said Mingus golf head coach Craig Mai. “They’ve won every match. We’ve had like three of the top five in every match, at least, so they’ve just been phenomenal. And it’s not just against other freshmen, it’s against sophomore, juniors and seniors.”

On Monday at 3 p.m., Mingus Union’s newest program will play their first ever-home match at Oak Creek Golf Course in Sedona against Prescott.

The Marauders are playing this season in a developmental league, against schools that are developing programs or don’t have enough girls for a full varsity. However, Mingus Union’s all freshman team is beating upper classmen.

Next year they will play a regular schedule and try and make it to State.

Kaila Bowers said being on the first Mingus Union girls golf team is really cool because middle school girls in Verde Valley played not having an option for school golf when they moved on to high school but now they do.

“So I think it’s really cool that us girls get to start that and so that the girls that are below us get to actually see that there’s some where to go play after middle school, so I think that’s really cool,” Bowers said.

Although the team is new and they are all freshmen, they all came in experienced.

“It’s awesome, because I’ve been playing for five years so I’ve been waiting to do this for a while now,” said Kaylee Watson.

“I think it’s cool that us four get to play together like we did before and I think that’s really cool that we’re all freshmen,” Bowers said.

Mai had hoped some upper classmen would join the team, the boys team hadn’t had a girl on it in a while, but said the all freshman team has really clicked and bonded.

“I think it’s better for the team to have us all at the same age so that we could like grow together and get used to each other,” Watson said.

Mai said they owe the success to the Cottonwood and Clarkdale–Jerome teams for laying the groundwork and that girls golf in Verde Valley is growing.

“We’re building it and getting it started and I think it’s just going to keep flourishing,” Mai said. “Once the other girls see them out there playing, they’ll want to pick it up.”

Before the season volunteer assistant coach Dennis Kitchen was promoted to assistant coach and so far this year Kitchen has mostly led the ladies team and Mai the gentlemen but they both work with all the players.

Kitchen is a math teacher at Mingus Union like Mai.

“It’s awesome Dennis and I have played golf for many years together,” Mai said. “Our classrooms are right next to each other and we really have very similar philosophies and expectations so it’s really worked out well.”

Watson, who finished first at the Marauders’ match at Prescott on Wednesday, said the first home match is really exciting, like they’re representing Verde Valley.

“The first match was really nerve wracking because I was nervous, I wasn’t sure what I was getting into,” Bowers said. “I wasn’t sure if they were much better than me or if we were equal and I thought it was really cool that I got to experience that with all my girls It was a ton of fun and in the end it all turned out great.”

When asked if he expected the Marauders to be this successful, Mai said “yes and no.”

“I’m not surprised at how well they’ve progressed but I really wasn’t expecting them to have that much success,” Mai said. “I thought they’d have a little success but they’d struggle a little bit but they’ve just really took off and done phenomenally.”