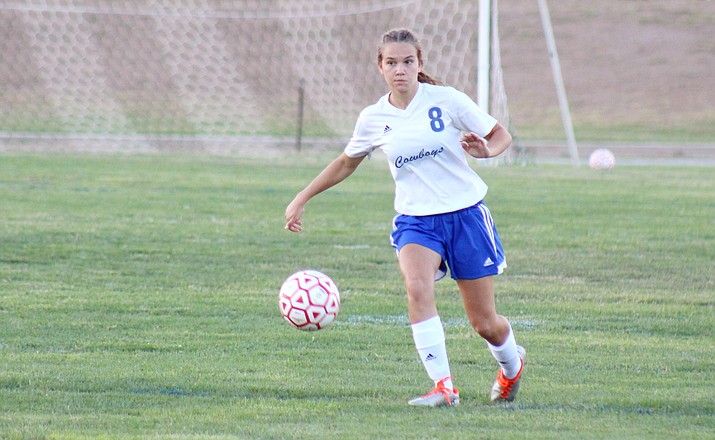 Camp Verde sophomore Tanna Decker is listed as a defender, midfielder and forward on the Cowboys’ roster but has impressed in her new position: sweeper. (VVN/James Kelley)

On the roster Camp Verde High sophomore Tanna Decker is listed as playing every position but goalkeeper but she seems to have found a home.

Decker has been playing sweeper and is a big reason why the No. 6 Cowboys are 6-2-1.

Her move allows senior Alden Teeters to move up.

“She’s actually playing a new position this year, she’s playing sweeper in the back and we kinda threw her in there because we wanted to get Alden, who’s our usual sweeper up front and she’s tore it up every single game, she’s been amazing,” Reay said.

“I think it’s huge because she plays the position so well and Alden plays good anywhere,” Reay said. “Having Alden in the middle really makes a difference in our middle, especially since Jocelyn (Fitzgerlad) got hurt, who played in the middle and now she’s not there and so I love being able to have Alden up front and I know that I know that I can trust her because Tanna can take care of it in the back.”

VVN: How’s the season been going for you?

Decker: It’s been going good. I’ve been moving around different positions but I got a new one. I’m not a fan of it, but it’s good, yeah.

VVN: Where have those been?

Decker: I was everywhere, midfield, defense, well now I’m sweeper but I was playing just wherever (laughs).

VVN: How do you think the team has been doing overall?

Decker: We’ve been doing good, we struggled with Northland Prep this past game but we’re definitely a good team. We can beat Northland Prep but we just lose our head and we just like kinda give up.

Decker: Mine is basketball but soccer’s my second.

Decker: I’ve played basketball longer and I just like it a lot more.

VVN: How different are they, I mean like with five players versus 11 and inside and outside?

VVN: What other things do you like to do besides sports?

Decker: That’s pretty much all I do, that and watch TV (laughs)

Decker: It’s been going good. So far it’s still the beginning of the year.

VVN: Do you have a favorite class right now?

VVN: Do you know what you want to do after high school?

Decker: I want to get a scholarship for basketball, that’s what I want to do.