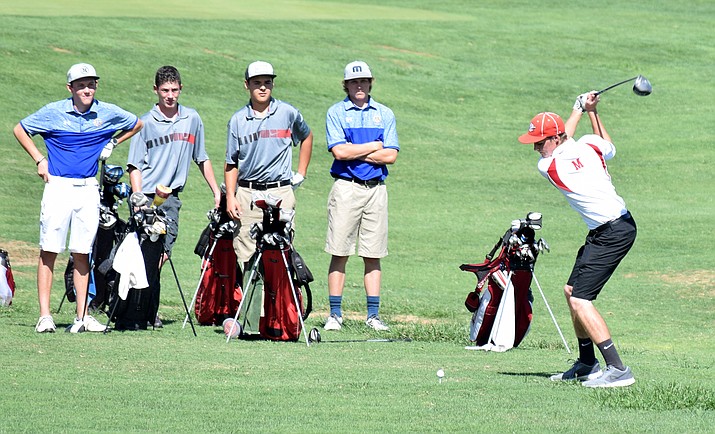 The weather is cooling down but Mingus Union junior golfer Justin Tanner is heating up.

“He’s been doing well,” said Mingus head coach Craig Mai. “Over the last couple of weeks, he’s really played his best golf of the season, so that’s been fantastic. He’s been shooting in the low 40s. At our match out at Oak Creek last week, he was medalist, he was low, shot 39, and then against (Tuesday) up at Continental up in Flagstaff he shot another 39, so it’s nice to see him starting to play really well.”

Tanner also plays baseball for the Marauders, where he was an outfielder and pitcher and hit .437.

On the golf course he has been on varsity his whole high school career.

“He’s just steadily improved year to year,” Mai said. “He’s been on the varsity, he’s lettered all three years, he’s a junior this year, but he went from his freshman year shooting mid 40s to maybe upper 40s to last year shooting to low 40s to this year getting down to the 30s consistently, so that’s nice to see, he’s really just steadily improved in all facets of his game, from off the tee box to his short irons to his putting and chipping.”

VVN: How has the season gone for you?

Tanner: It was rough to start and I think it’s starting to pick up for me right now.

VVN: Coach said you’ve been playing your best golf of the season lately…

VVN: What do you think has been the key to that?

Tanner: Just focusing on every shot and not thinking about bad shots in the past.

VVN: How has your game kinda changed in your three years here?

Tanner: Throughout the years I would say I’ve cut down on a lot of strokes through putting and chipping, short game has helped a lot.

VVN: When did you start playing golf?

Tanner: Right now it’s a tie between golf and baseball.

VVN: A lot of guys pick the sport that they’re currently in like “oh that’s my favorite one,” is that kinda how you are?

VVN: Do you think those sports are pretty related? Pretty similar in that you focus a lot on precision and stuff like that?

Tanner: Somewhat year, baseball helps in swing speed a lot but yeah I guess being a pitcher helps in concentration a little bit.

VVN: Do you have a favorite golfer?

Tanner: I would have to say Rory McIlroy.

Tanner: He was one of the younger golfers early in his days and he’s also got quite a bit of power for how small he is. He also has a great short game.

VVN: Do you have a favorite baseball player?

Tanner: He’s on the Arizona Diamondbacks, which is my favorite team and he’s been on the team forever now.

VVN: I notice you wear a baseball hat when you play, did you pick that for any specific reason other than it’s Mingus or is there any kind of history behind that or anything?

Tanner: I think it was just because it had a Mingus.

VVN: Have you thought about what you want to do after high school?

Tanner: Yeah I’ve thought about a couple things. I want to go to college for sure.