Could Beaver Creek School go K-12?
District superintendent says curriculum could be expanded in a ‘couple of years’ 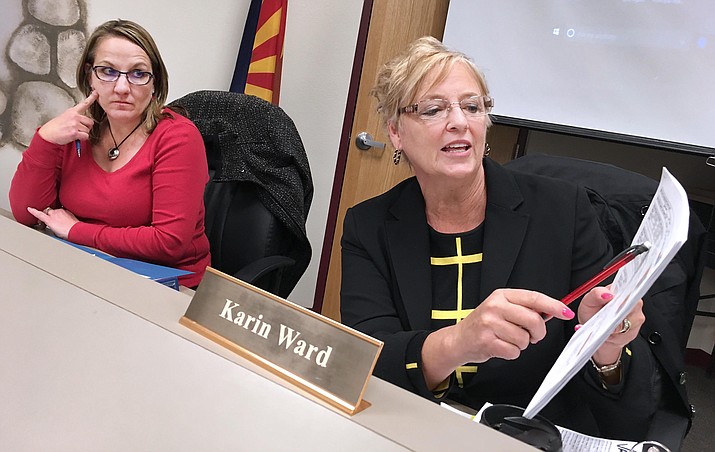 Beaver Creek School Board member Karen Dufresne and District Superintendent Karin Ward, from left, discuss possible high school programming that could be offered at the K-8 school. Monday, the board will continue discussions on possibly offering high school curriculum as it hosts the superintendents and business managers at both Camp Verde and Mingus Union high schools. (Photo by Bill Helm)

RIMROCK – In November, the Beaver Creek School District’s governing board began to explore ways to offer high school programming to its community’s students.

After spending the past several months soliciting information, both the district and its board are still collecting data.

But the K-8 school district has made one decision moving forward. Administrators and board members need more time to make sure they have all the information they need for making a decision, District Superintendent Karin Ward said Wednesday.

“We’re going to be taking another year to take in ideas about high school programming,” Ward said.

Ward projected that the district will “probably have something” by way of high school programming in a “couple of years.”

That doesn’t mean that BCSD will be a full K-12 school in two years. But finding ways “to support high school students who are getting lost in other systems is critical to Beaver Creek School’s mission,” Ward said.

Which is why the district will hold a work session at 5 p.m. Monday, as administrators and board members will facilitate a discussion with administrators from Camp Verde and Mingus Union high schools, the two schools that Beaver Creek’s students primarily attend once they graduate from eighth grade.

Beaver Creek School has invited the business managers and superintendents from both Camp Verde and Mingus Union to speak to the board.

Business managers Steve Hicks and Lynn Leonard will talk about the tuition cost-per-student each school district charges BCS to send its high schoolers to their respective districts.

Camp Verde administrator-in-charge Danny Howe and Mingus Union superintendent Penny Hargrove will talk about the successful completion of high school and career and technology education classes by Beaver Creek graduates, as well as success stories of those students.

For Ward, coming up with a plan for offering high school curriculum at Beaver Creek School “isn’t black and white.”

A copy of the April 9 agenda will be available within 24 hours of the 5 p.m. work study session at http://www.bcs.k12.az.us/Governing_Board.