CV baseball bounces back to blast No. 12 Northland Prep 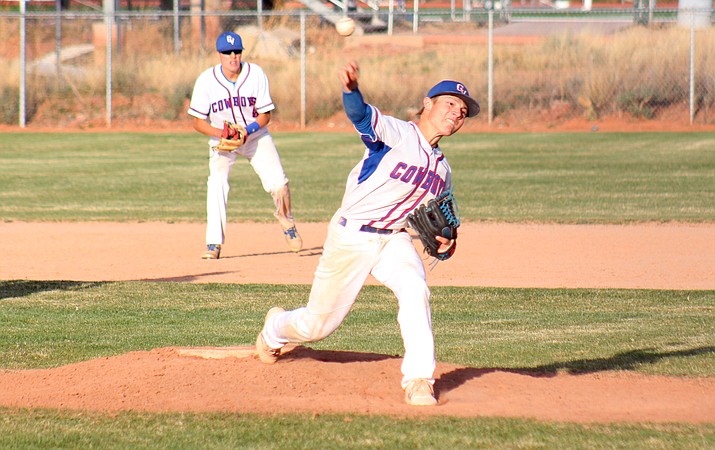 Camp Verde junior Dominiq Bruno gave up five hits and zero walks and got a complete game shut out in the Cowboys’ 10-0 win over Northland Prep on Friday. (VVN/James Kelley)

The No. 20 Cowboys beat No. 12 Northland Prep 10-0 in five innings to bounce back from their 4-3 loss at Paradise Honors on Tuesday.

“It was nice to come out and play well,” said CV head coach Will Davis. “We had the energy and came out sharp, worked hard and that turned out good for us.”

The Cowboys scored in every inning, including three runs in the first and second and two in the third.

“I think we did pretty good, we came out and played our best game of baseball and we came out with the win,” said junior utility player Dominiq Bruno.

The win improves Camp Verde to 3-1 in 2A Central play after the first round of games in the region. The Cowboys are in second place in the region, a half game behind the Paradise Honors.

“I think we came out and actually focused up and played super solid,” junior pitcher/infielder Dawson McCune.

On the mound, Bruno gave up five hits, zero walks, no runs and struck out three.

“Dom was just Dom,” Davis said. “He threw in the zone. It’s nothing overly impressive but it’s all great. Curveball’s in the zone, slider’s in the zone, fastball’s on the edges where he’s supposed to hit and he keeps doing that, they give us a chance every time.”

“I had the jitters going and I was pretty nervous for a while, but after the second or third inning, I did better,” Bruno said.

Camp Verde out hit the Spartans 7-5.

The win comes after the Cowboys were hard-luck losers at Paradise Honors.

“We played well, we didn’t make any errors or mistakes, pitcher pitched well, we just didn’t get the breaks in that game, the breaks went their way that game,” Davis said. “Either team could’ve won. We were up 3-0 until the last inning and had a few bloop hits and a passed ball, pitcher hit pitch count and then at the very end they got one little slap hit and scored the winning run. It’s just one of those games that we really controlled all the way through and lost at the end.”

Schuh and freshman infielder/outfielder Peyton Kelley each drove in a run and Bruno hit a double. Junior Dakota Battise threw 6.1 innings, giving up six hits and three earned runs but striking out nine.

“Well we got chewed out and we were told we better come back and focus and play some baseball and we came back focused and we got the win,” Bruno said.

Camp Verde’s next game is on Tuesday at 1A No. 15 Anthem Prep. Their next home game is on Saturday against No. 13 Scottsdale Christian at 10:30 a.m.

Davis said they probably to win out in their final four region games to repeat as champions.

“Paradise Honors is number one in the region, they’ve beat everybody,” Davis said. “So we basically gotta win out in the region, which is gonna be tough, because this is a good team here, they just didn’t play well (Friday), we got all the breaks (Friday), every ball that was just foul or just fair went our way (laughs), so they’ll be tough to beat at Northland. I know Sedona’s gonna want to beat us real bad and they’re going to come with their best, so it’s gonna be tough too. We can beat Paradise Honors and that’s what we have to do: we have to win out in the region and we’ll end up with a tie with them there, which makes the Scottsdale Christian game next Saturday very important for us, if we can get to there without another loss and we’re two way.”