Up in arms: Firearm owners weigh in on gun conversation 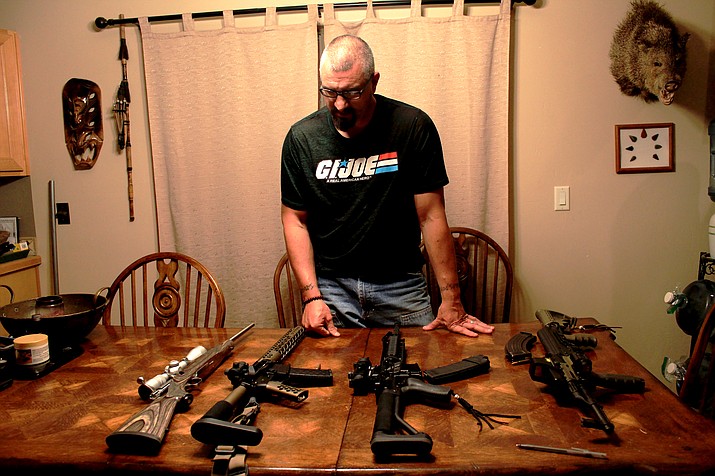 For Rob Wager, guns are very much a part of his livelihood which is why he takes great offense when he feels his right to bear arms is threatened.

RIMROCK -- Rob Wager still keeps the first “gun” he ever owned inside a safe in his Rimrock home. It’s a BB gun he got when he was just 5 years old.

Although a BB gun technically isn’t defined as a firearm under federal law, this one shares space in a safe with a wide range of rifles, shotguns and handguns.

The guns Wager and his family own are very much a part of their livelihood and identity, he said. They are also part of their rights as Americans.

“Guns won our freedom,” he said.

Wager is not alone in this sentiment. That is why he and many other gun owners across the Verde Valley take great offense when they feel their way of life is being threatened.

Laws on the books

Last month, high school students across the Verde Valley marched outside Sedona Red Rock High School as a response to recent mass shootings that have devastated the nation.

As gun control advocates rally for more provisions on certain firearms, gun owners in the Verde Valley say there are already laws on the books that aren’t being enforced.

A recent Verde Independent poll showed that 55 percent of readers don’t think there should be any changes to Arizona gun laws.

“Criminals don’t give a $@#% about laws,” he said. “They will do what they want … it’s the same philosophy with narcotics.”

“There’s enough already,” he said. “Any additional regulation would only interfere with law-abiding gun owners.”

Arizona gun laws are some of least-restrictive in the nation. The law states that anyone 21 or older, who is not already prohibited by law to own a firearm, may carry a weapon openly or concealed without a permit.

But Wager said that when he used to work at Pawn Palace in Cottonwood, most of the customers he came across did have Carrying Concealed Weapons (CCW) permits.

“Arizona is probably close to No. 1 in the union with pro-gun laws that make sense,” he said.

Jaree Schults said she was never around guns growing up in Wyoming. Her attitude on guns changed however after she was almost raped in her home. (VVN/Kelcie Grega)

Wager’s wife, Jaree Schults, said she was never around guns growing up in Wyoming. Her attitude on guns changed, however, after she was almost raped in her home.

In her 20s, she lived alone in a one-bedroom apartment. She was taking a shower one evening when she heard a stir.

“A guy came into the house … he had a stocking over his head and had on a blue turtleneck,” she said. “He was naked from the waist down.”

Schults said the man tried to rape her but she kept fighting. She ended up biting a part of his shoulder and he ran off.

“I survived ... I am not ashamed,” she said. “But now my mindset is different. I will protect myself.”

Schults said she now hangs a shotgun above her shower.

“Back then I had a liberal frame of mind,” she said. “After the attack I armed myself … and pepper spray doesn’t protect everyone.”

“For ladies, it’s all about self-defense,” he said. “Women are targeted more. Guns up your ability against attackers. A gun is a great equalizer.”

For some gun-control advocates, the issue isn’t about all firearms.

“It’s against “weapons like the AR-15 that were designed with the express purpose of killing mass amounts of people incredibly quickly,” said Mingus Union High School senior Mackenzie King in an interview with Verde Valley Newspapers.

The AR-15 is a lightweight semi-automatic rifle that according to the New York Times has become the “most beloved and most vilified weapon in the country.” The AR-15 has been the weapon of choice of many mass shootings, including one of the most recent school shootings in Parkland, Florida, that killed 17 people and wounded more than a dozen.

On Friday, a federal judge ruled that rifles like the AR-15 fall beyond reach of the Second Amendment following a lawsuit challenging Massachusetts’ ban on assault weapons and large-capacity magazines.

Americans own about 5 million AR-15s, according to the National Rifle Association. Following the expiration of the Federal Assault Weapons Ban in 2004, there was an explosion in AR-15 sales, according to Wager.

Cornville resident and gun owner Jeff Jones calls the AR-15 the “Barbie doll” of firearms because it’s easy to customize.

“It’s very versatile,” he said. “It can be used for hunting small game and self-defense. I use it for self-defense because of the guaranteed aim.”

But Wager said there are a lot of misconceptions people have about the AR-15, one in the nomenclature itself.

“AR stands for ArmaLite Rifle, not ‘assault rifle,’” he said. Wager also noted that the use of the term “assault weapon” can really be used arbitrarily.

“Anything can be an assault weapon,” he said. “We need to stop blaming the object. When we blame the object, we are ignoring the human part of this. Common sense is just shut down, which really bothers me.”

Wager said he understands why students from the March For Our Lives protests are angry and frustrated but “The Second Amendment is there to protect The First Amendment.”

“I think it’s appropriate for (kids) to get their feet wet in politics,” he said. “But they should speak out at their own level.”