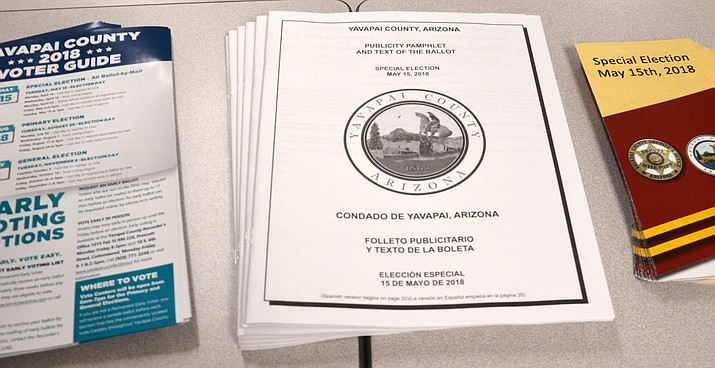 Jail District sales taxes pay half of the jail system’s costs. Currently, the annual cost for operation and maintenance of the Yavapai County jail system is $18.1 million.

During the week of April 16, the publicity pamphlet and text of the ballot for the proposal to extend the quarter-cent sales tax will be mailed out to every registered voter in Yavapai County.

If you do not receive your copy in the mail, please be sure to contact the Voter Registration Department at 928-771-3248.

Yavapai County Board of Supervisors Chairman, Rowle Simmons said, “It is important to remember that this is not a new tax and is not to build a new jail.”

Yavapai County Board of Supervisors Vice Chairman, Randy Garrison said, “Operating our existing jail must be paid for. I would rather have those visiting the area share in that burden than to have the residents of Yavapai County pay for 100 percent of it. This sales tax does just that.”

The text of the ballot question reads (in part):

The Board of Directors of the Yavapai County Jail District asks the voters of Yavapai County for approval to extend the existing Jail District excise (sales) tax of up to ¼ of a cent per dollar ($0.0025) for an additional twenty years to continue revenues necessary to support the county jail system.

In 1999, the citizens of Yavapai County approved the Jail District Board of Directors to levy a jail district sales tax of up to ¼ of one cent ($0.0025) for a period of 20 years. The jail district sales tax authorization was approved by 70 percent of those voting. Since approval all funds collected from the tax have been used to fund the operations of the county-wide jail system.

Jail District sales taxes pay half of the jail system’s costs. Currently, the annual cost for operation and maintenance of the Yavapai County jail system is $18.1 million. Approximately half of that cost ($8.8 million) is funded by the current ¼ cent jail district excise (sales) tax.

The Board of Supervisors, Sheriff and other county criminal justice officials have worked together to reduce the jail population, cut jail operating costs, and increase efficiency in jail operations. These include the following:

There were over 40 letters received in support of the measure and none in opposition.

Letters came from Sheriff Scott Mascher, County Attorney Sheila Polk, all five of the Board of Supervisors, Senator Karen Fann, Steve Pierce, Prescott Mayor Greg Mengarelli, and many others.

For more information on the ballot measure, please visit www.YavapaiJail.com

To see a short video on what it takes to put together 132,888 ballots in six days, go to www.facebook.com/YavapaiCounty.