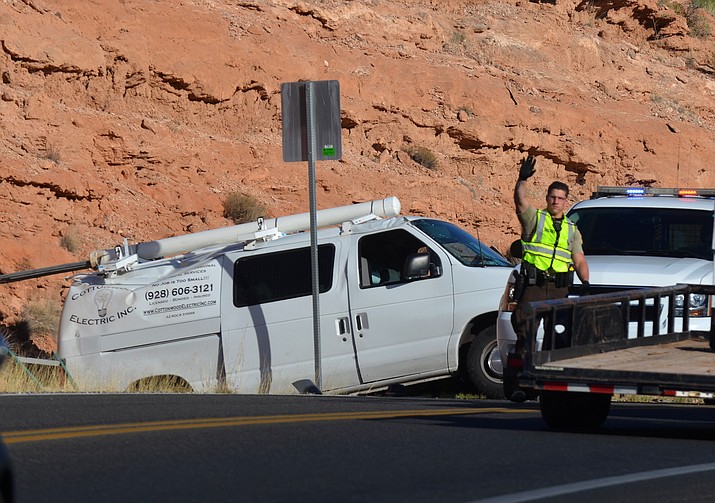 A woman involved in a multiple-vehicle collision yesterday was found in possession of methamphetamine, according to a Yavapai County Sherriff's Office media release.

YCSO deputies were dispatched to a multiple-vehicle collision on Cornville Road yesterday.

A woman involved in a multiple-vehicle collision yesterday was found in possession of methamphetamine, according to a Yavapai County Sherriff's Office media release. (VVN/Vyto Starinkas)

Deputies arrived to see extensive traffic back-up and fire personnel already on scene treating the injured. Three vehicles were involved and two of those were badly damaged.

A gray Chevrolet Sonic, driven by 47-year-old Arlene Johnson from Mesa, was stopped in the middle of the east lane facing south and heavily damaged. A blue truck on the north side of the roadway showed minimal damage and there was a white van with extensive damage sitting off the roadway, according to YCSO.

The driver of the blue truck confirmed seeing the Chevrolet Sonic collide with the white van head on which caused him to swerve out of the way to avoid the collision. As a result, he ended up off the roadway after striking a signpost.

All drivers involved were wearing their seatbelts.

While at the hospital, Johnson was found in possession a gram of methamphetamine and a glass pipe used to smoke the same. She had attempted to dispose of these items in a trash can at the hospital, but they were recovered by deputies. Johnson admitted smoking methamphetamine within last the last two days along with regular meth usage over the last several years. A blood test sample was submitted. Details of Johnson’s injuries were not available and she was not booked at this time.

The following charges are under review and include Possession of Drug Paraphernalia, Possession of a Dangerous Drug and Tampering Physical Evidence. A charge of DUI involving drugs is pending outcome of the blood test.