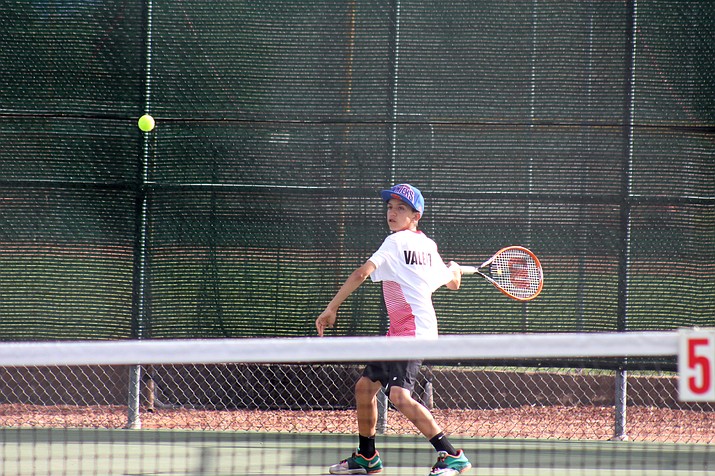 Mingus sophomore John Valentine is competing in the state singles tournament this weekend for the Marauders. (VVN/James Kelley)

The No. 16 Marauders (10-4, 5-3 Section II) missed out on the state tournament by one spot. The tournament features 16 teams but No. 20 Lee Williams (11-3, 6-0 Section III) took Mingus Union’s spot in the tournament because they won their section.

The doubles team of senior Pedro Cremasco and junior Brigham Peterson will face No. 5 seeded Ifantopul/Meyer Jr. of Nogales in the first round of the state tournament on Friday at the Scottsdale Ranch Park and Tennis Center.

“(They) won third place at the Kiwanis Invitational Tournament this year,” said Mingus head coach Larry Lineberry. “Out of 21 teams they finished third, so they’re a good doubles team, so they got a shot.”

“Pedro is from Brazil and is very, very exuberant and emotional,” Lineberry said. “So Brigham is a good calming effect on Pedro and they’ve matched up very well.”

Sophomore John Valentine will face Finch from Lake Havasu in the first round of the singles tournament, also on Friday at Scottsdale Ranch Park and Tennis Center.

“It’s an unseeded player so he’s got a shot,” Lineberry said. “I don’t know the player so I don’t know what his record is or anything about him but John has played very solid for us at number two all year and is one of the most competitive players that I’ve worked with and he’s a very confident player, so he’s small in stature but he’s big with his confidence so he’s won a lot of matches just by not giving and he has very good placement with his ground strokes, he hits the open court and exploits weaknesses better than anyone on our team.”

The individual tournaments consist of first and second rounds on Friday, the third round on Saturday and then the quarterfinals, semifinals and final next week.

“It’s really exciting I was invited last year but I wasn’t able to go, so this will be my first time and I’m real excited to see the competition and I think the matches will be close and it will be a lot of fun,” Valentine said.

Lineberry said this year Valentine has a better serve, forehand and his shot selection is better, he’s able identify and exploit weaknesses in opponents.

“Last year I kinda just pushed the ball back, like you would play if you were going out with your family,” Valentine. “This year I really got my technique down, I was beating people last year that way but now that I’m facing higher competition, my style of play has really improved and I’m a lot technically better.”

After a nerve-racking end to the season, Lineberry said the Marauders go to the individual tournaments with nothing to lose.

“Oh I think this is gravy for them,” Lineberry said. “They’ve had such a great season that I think the matches during tennis season were more pressure because we were 1-13, this year we’re 10-4 and the last five matches that we had were the biggest matches of the year and so they had to perform in order to have a chance to go to State and get a 10 win season, so now whatever they do is bonus, there’s really not a lot of pressure on them in the individual tournament like there was during the season.”

Seniors Kylie Densmore, Chelsea Clark and Pei-Wen Yang will compete in the individual state tournaments for the girls team.

Normal singles No. 1 senior Talon Whiteley is unable to compete because the tournament conflicts with requirements for FFA at the Verde Valley Fair.

Yang will compete for Mingus Union in the singles tournament.

“To prepare for the Verde Valley Fair Show Up Day, FFA students go through a dress rehearsal, this is her first time showing a steer,” said Mingus Union head coach Andrea Meyer. “Her steer died last year and it’s been a goal of a hers to show a steer and do well and she’s very conscientious about everything she does, so I sadly understood her choice and we have a good competitor in Pei-Wen.”

Yang will face the Nunez of Peoria in the first round of the tournament on Friday at the Phoenix Tennis Center.

“Pei-Wen plays and unseeded player first round and if she wins that then she’ll play the No. 6 seed in the tournament,” Meyer said. “Pei-Wen’s a very tenacious back court player and she never gives up on a ball and so I’m looking for her to return a lot of balls and stay in the match and win her first match and then we’ll see what she can do second round, she’s very dogged.”

Densmore and Clark will in the doubles, also starting on Friday at Phoenix Tennis Center. They will face No. 4 seeded Zadro/Mulick of Tucson Catalina Foothills, an Arizona tennis power.

The Falcons’ team is ranked second and 13-0.

“So they’ll have a very tough first draw but I’ll be pleased if I can see those principles of doubles play working I’ve seen some good solid play, some eagerness from them as they prepare, so I’m happy with that,” Meyer said.

The weather should be more forgiving, with a forecasted high of 80 on Friday and 90 on Saturday in Phoenix, as of Thursday morning.

“The weather is going to be over cast on Friday, something like 78, which is a far cry from 93, which is typical for Phoenix Saturday is going to be warmer, I think about 90 degrees, but still it’s going to be better conditions than usually face,” Meyer said.