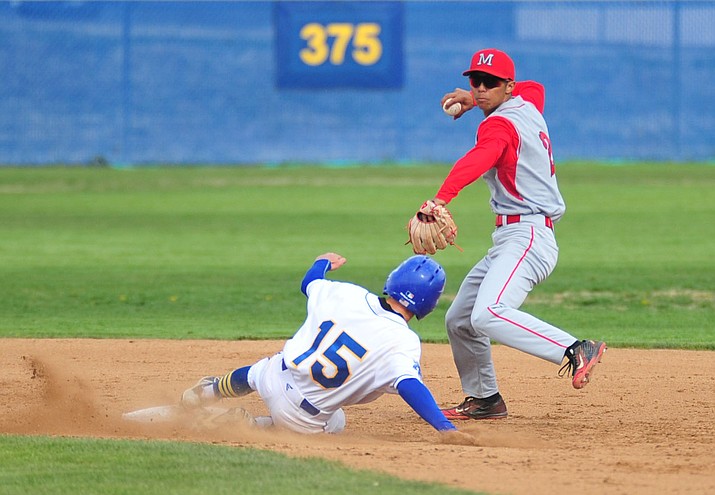 High school baseball and softball seasons are just about entering the ninth inning and the Verde Valley teams could earn big prizes.

Camp Verde and Mingus Union’s baseball and softball teams are eyeing region championships and high seeds in the state tournament.

Cowboy softball, ranked No. 3, hosts No. 6 Paradise Honors at 3:45 p.m. on Friday. With a 7-0 record and a 3-2 win over PH a couple weeks ago, the Cowboys would win the region with a victory on Friday.

Mingus Union softball is ranked No. 8. They have a doubleheader with No. 27 Lee Williams on Saturday at home at 1 p.m. and a home game against No. 10 Bradshaw Mountain on Monday at 3:45 p.m. to go.

If they hold on to a top eight spot, then they can avoid the play-in game. This season the AIA added play-in games to the postseason, with the top eight going straight to the big dance and the next 16 playing for the chance to enter the field of 16.

No. 9 Mingus Union baseball closes out the season with a doubleheader at No. 16 Lee Williams on and then a home game against No. 17 Prescott at 3:45 p.m. on Monday. The Marauders are two games ahead of LW in Grand Canyon standings and those two games are the Volunteers’ last of the regular season.

Currently Mingus Union is ninth and Phoenix Thunderbird is No. 8. Last season No. 8 Thunderbird knocked out the No. 9 Marauders in the first round of the state tournament by a run.

Like softball, 4A baseball has a play-in game for teams ranked ninth to No. 24. The play-in games for both baseball and softball would be on Wednesday at 4 p.m. at the higher seed.

As for Camp Verde baseball, after they lost 11-2 to Sedona Red Rock at home on Tuesday, they slipped to No. 19 in the rankings. However, like softball they also have a big game against Paradise Honors at home.

On Friday at 3:45 p.m., they host No. 15 Paradise Honors. The Panthers are a half a game ahead of Camp Verde in 2A Central standings.

Whether or not a win against PH would move Camp Verde up into the top 16, winning the region would move them into the state tournament. The 2A conference does not have play-in games.

After Paradise Honors though, Camp Verde closes out the season at No. 16 Northland Prep. If they beat PH but lose to NPA, then all three would be tied at 5-3 in region play.