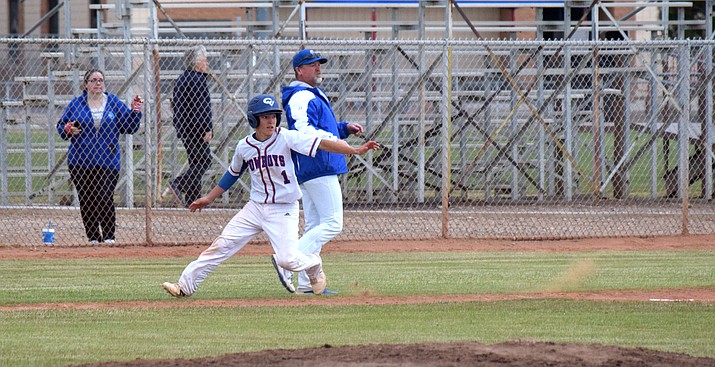 Camp Verde junior Dominiq Bruno runs around third base during the Cowboys’ win over Paradise Honors. The Cowboys tied with Paradise Honors and Northland Prep for first place in the 2A Central but lost out on the tiebreaker to NPA after losing to the Spartans on Tuessday. (VVN/James Kelley)

The No. 19 Cowboys lost 5-3 at No. 12 Northland Prep. Camp Verde needed to win the game to secure the 2A Central’s automatic bid to the state tournament.

With the loss, the Cowboys, NPA and No. 17 Paradise Honors tied for the region championship. Each team had 5-3 region records but Northland Prep’s 7-3 conference record earned them the automatic bid to the state tournament.

Paradise Honors was in the second spot with an 11-5 2A record and Camp Verde was third among the champions with a 7-5 conference record.

Northland Prep scored two runs in each of the first two innings and then another in the fourth. Camp Verde scored a pair in the sixth and one in the seventh.

Freshman Mason Rayburn pitched a complete game for the Cowboys, giving up two earned runs, six hits and five walks while striking out five over the six innings.

Camp Verde beat the Spartans 10-0 in five innings earlier in the month at home.

The Cowboys closed out the season losing three of their last four.

Although Camp Verde’s season will likely end earlier than they would have hoped, the youthful Cowboys defied expectations.

Last year they won the region but they did so on the strength of 10 seniors out of 16 varsity players.

This year they had zero seniors, six juniors, five sophomores and four freshmen.