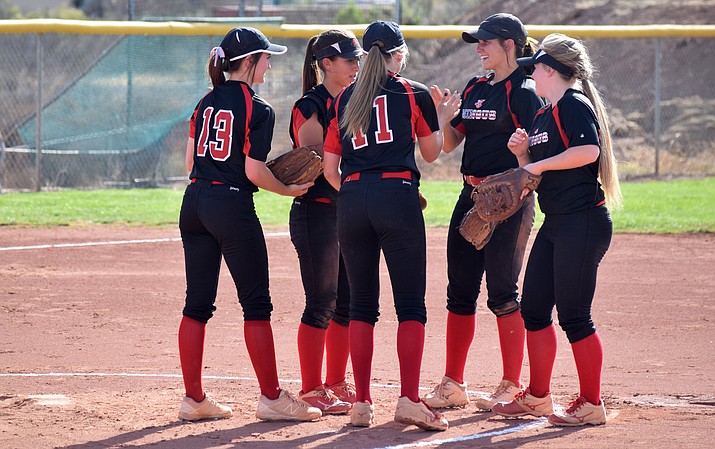 Mingus softball will open the 4A state tournament at home at 10:15 a.m. on Saturday. (VVN/James Kelley)

The Marauders earned the No. 8 seed in the 4A state tournament and will host No. 9 Coconino at 10:15 a.m. on Saturday in the first round.

On Monday Mingus Union beat the No. 10 Bears 6-5 at home, scoring three in the bottom of the seventh.

Bradshaw Mountain took a 3-0 lead in the third inning but in the home half that frame, the Marauders scored three to tie it. Then the Bears scored two in the sixth.

“It was bigger than it needed to be, unfortunately,” said Mingus head coach John Brown. “I mean we were hoping to win and we did, but losing that game could have changed us being in the top eight obviously, so it was good that they were able to come back in the end and pull it out. That’s a game that we should have won but it didn’t look like that in the seventh inning.”

Brown said winning like they did on Monday could help with the Marauders’ confidence.

“Absolutely, especially because it was the bottom of our lineup that did it for us, our first three or four batters were struggling all day, so to watch the end of the line up clean it up for us, really gives them a lot of, I don’t know, strength and motivation going in,” Brown said.

It’s the first time Mingus Union softball has hosted a state tournament game since 2010, when the fourth seeded Marauders lost 2-0 to No. 13 Phoenix Thunderbird.

“It’s pretty important to me and to the girls,” Brown said. “It’s been a long time since Mingus has had a state home game, still having to win that game to actually get into the double elimination bracket adds some stress to it obviously, but it’s an important game for us, so it’s nice to only have to have one of those.”

The first round of the state tournament is single elimination, then it is double elimination until the championship game, which is winner take all.

“I think if you’re going to do a double elimination tournament, you should do it from the beginning and not make teams play in two games just to make it into the bracket,” Brown said. “It’s really not a double elimination bracket until you get to 16, so I think it’s better than it has been but it’s a far cry from what it should be.”

During the regular season they beat Coconino 5-3 on the road but lost to them 5-3 at home.

“The nice thing is we’ve got a lot of experience against them, we’ve got a lot of information, we know how to play them, the bad is part is we have split with Coconino, so that gives us a best of three opportunity and the winner gets to keep playing,” Brown said before the brackets were announced.

Plus playing an opponent from nearby means they will have more fans than a Tucson or Yuma team would.

“Being close to home they’ll have a lot more people coming down to watch them, that’s for sure,” Brown said.