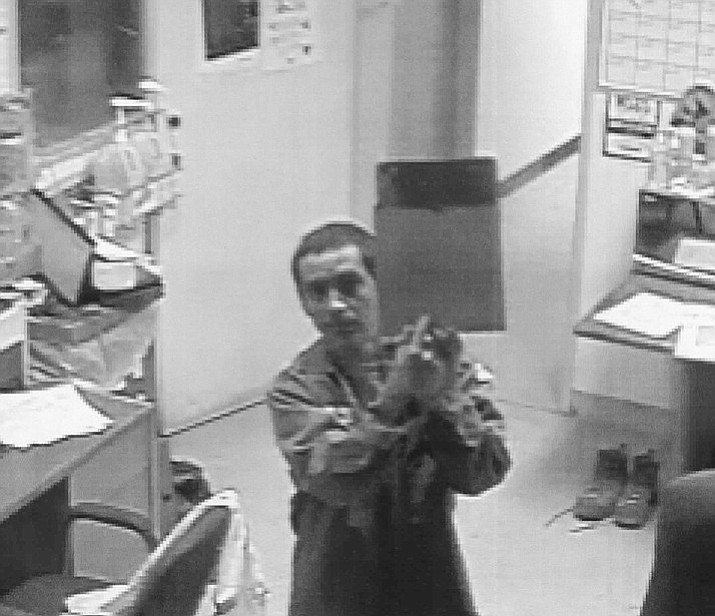 A man suspected of stealing a 2015 Ford F-550 used by the Waste Management Gray Wolf Landfill on Highway 169 is shown on a camera wearing one of the company’s employee uniforms and pointing to a clipboard. (Yavapai County Sheriff’s Office/Courtesy)

On Wednesday, April 4, the manager at the Waste Management Gray Wolf Landfill on Highway 169 reported the theft of a white 2015 Ford F-550 truck used by the company. It contained several special equipment items (i.e. welders and a plasma cutter) and mechanics’ tools with a total estimated value of $300,000.

On April 6, the stolen truck was recovered by troopers from the Department of Public Safety in the Flagstaff area. Fortunately, most of the tools were still intact. The vehicle sustained minor damage apparently due to the suspect’s driving.

Regarding the suspect’s movements, the reporting party told deputies the suspect came into his yard at the landfill around 7:30 p.m. the prior evening, April 3, based on video captured from security cameras. The suspect put on an employee’s uniform and ate food taken from the office refrigerator. Just after 10:30 p.m., the suspect drove out of the yard in the stolen Ford F-550 truck onto Highway 169 toward Interstate 17. The office had been unoccupied since the prior afternoon.

Efforts to identify the suspect, including a review of inmates released from the Yavapai County jail in Camp Verde, have been unsuccessful. YCSO continues the investigation and is seeking any information from the public to identify and locate the suspect seen in the attached photos. If you have information, call the Sheriff’s Office at 928-771-3260 or Yavapai Silent Witness at 1-800-932-3232. Refer to case number 18-011992.