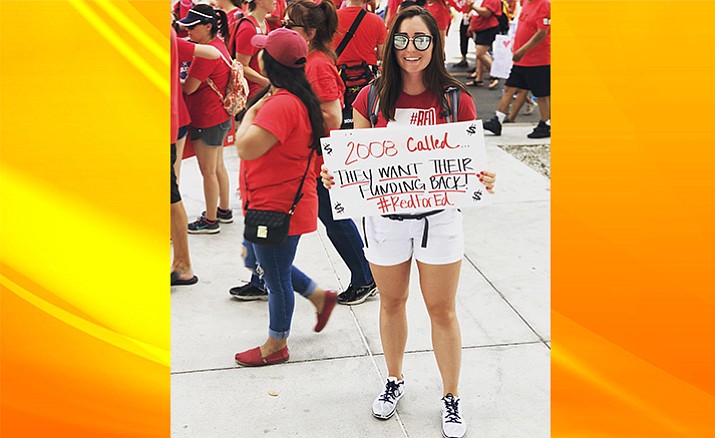 PHOENIX -- Ignored by the governor and GOP lawmakers, a coalition of teachers, parents and education advocates are taking their case for more state dollars for classrooms directly to voters even as Ducey and legislative leaders say they’ve reached a budget deal -- one that ignores those demands.

An initiative filed Friday would put a surcharge on the earnings of individuals who earn more than $250,000 a year -- $500,000 for couples. And the biggest increase would be for those in the $500,000-plus income range.

Backers have an uphill fight just to get the measure on the November ballot. They have to gather 150,642 valid signatures on petitions in just the next 68 days -- or more than 2,200 signatures a day.

Organizers said the levy could raise about $690 million a year. But they would not answer questions about who is financing the effort, with Mesa high school teacher Joshua Buckley, chair of what’s being called the Invest in Education Committee, said all that will have to wait until Monday.

What is known is that 60 percent of whatever is raised would go to teacher salaries.

That could most immediately provide dollars for the 19 percent teacher pay hike that Gov. Doug Ducey and Republican legislative leaders have agreed to provide by the 2020-2021 school year. But Ducey’s plan lacks an actual funding source, with the governor insisting that the $670 million price tag can be financed largely through an improving economy.

The balance of what the initiative would raise would be earmarked for general school operating budgets. That could help restore the $1 billion that has been cut from state aid to schools in the past decade.

It would permit schools to use some of those dollars for pay raises for support staff, people not included in the governor’s plan. But school boards would be required to seek input from teachers and staff on how to use those dollars.

The move comes after Ducey announced Friday there are enough Republicans who will vote for his teacher pay plan -- and the entire $10.1 billion state budget -- even though it does not include other priorities that educators want.

Meanwhile, the strike that has closed most schools entered its second day on Friday, with another rally on the Capitol lawn.

The Arizona Education Association pegged attendance at 30,000, compared with 50,000 the day before; the Department of Public Safety estimated the rally at only about 4,000.

AEA President Joe Thomas said what is disheartening is that most lawmakers were not even around to hear from educators, having adjourned Thursday until Monday.

Thomas said teachers will be meeting in local groups over the weekend to decide whether to remain out of work again Monday -- and possibly beyond -- in a last-ditch hope of pressuring lawmakers and the governor to modify the plan. He also said it may be premature to call off the walkout simply because of the initiative, noting backers have yet to get the signatures, much less get voters to approve it.

Ducey, meantime, remains adamant that teachers should return to their classrooms as his plan gives him the raise they want, even if it doesn’t include specific dollars for support staff and even if it does not spell out how the state intends to bring aid to schools back to where it was a decade earlier.

It is that gap the initiative is designed to address.

“It creates a secure funding source to keep great teachers in Arizona classrooms and give our students the one-on-one attention they need to be successful,’’ said David Lujan. A former Democrat lawmaker, he now is the director of The Arizona Center for Economic Progress and the treasurer of the initiative campaign.

“It does so in a thoughtful and responsible way by balancing our revenue streams and asking those who can afford it to pay their fair share,’’ he said.

Buckley who teaches at Red Mountain High School in Mesa, said the additional revenues will help address overcrowded classrooms, teachers paying for supplies from their own and, in some cases, teachers leaving the profession or leave the state “because they could not afford to support their own family.’’

But it is the unreliability of state funding that led to the teacher strike and, now, the initiative.

But in that same time, nearly 79,000 youngsters have been added to the system, bringing enrollment up about 1.1 million.

What really makes a difference, though, is those dollars have not kept pace with inflation. Once that is factored in, legislative budget staffers say the money per student is worth $1,000 less than in 2008.

Multiply that by 1.1 million students and that’s the $1 billion educators say is has been taken from schools.

But gubernatorial press aide Daniel Scarpinato said Ducey’s plan moves strongly in that direction. Aside from the $670 million price tag of the teacher pay hikes when fully implemented, the governor has vowed to restore within five years $371 million that schools are not now getting for things like books, computers, buses and minor repairs.

Reliability of state dollars, however, has sometimes proven elusive.

Lawmakers agreed two decades ago to assume responsibility for new school construction and major repairs. That program, known as Students FIRST -- for Fair and Immediate Resources for Schools Today -- was designed to put the state into compliance with a decision of the Arizona Supreme Court which found the state was not complying with its constitutional obligation to fund a “general and uniform’’ school system.

But there were no dollars for the following three years before funding was restored -- only to be effectively zeroed out again in 2009.

But it took the Arizona Chamber of Commerce and Industry less than an hour to announce it would oppose the plan. Chamber President Glenn Hamer said his group supports Ducey’s proposal to fund teacher pay hikes through improved economic activity.

“It is never a good time to raise income taxes on small businesses and their employees,’’ Hamer said, noting that many businesses in Arizona are organized in a way so that the income is paid not by the corporation but by individual owners. “That would just create a drag on the state’s overall economy.’’

Anyway, Hamer argued, the income of the richest Arizonans is highly volatile, making it a bad idea to rely on that to fund education.