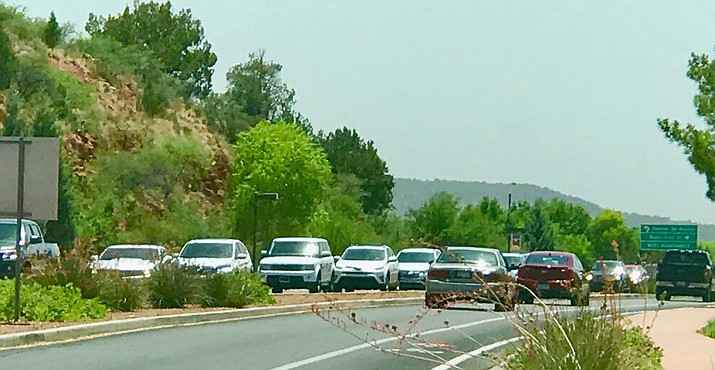 Looking down the road at projected population increases, especially those in metro Phoenix, Keep Sedona Moving believes that unless some things are done to alleviate the State Route 179 congestion in the next five to 10 years, traffic will become nightmarish throughout the year, not just during peak tourist seasons. Villager photo by Gail Simpson

Speaking before the July 12 Big Park Regional Coordinating Council, Village resident Rick Williams and Yavapai County Supervisor Randy Garrison announced a renewed effort to explore the feasibility of an alternative route from the Village of Oak Creek to West Sedona. A highly controversial issue in the community for many years, a new organization, Keep Sedona Moving, has recently formed to once again assess the desire for such a route, based on the reality of increased traffic. Several possible locations have been proposed, while funding is a big question.

The following hand-out was distributed at the Council meeting:

Keep Sedona Moving (KSM) is a grassroots organization formed by four Big Park residents who, like a lot of their neighbors, are becoming increasingly disenchanted with the traffic congestion along Highway 179 and how it has eroded the quality of life they sought in Big Park. Looking down the road at projected population increases, especially those in metro Phoenix, the group believes that unless some things are done to alleviate the problem in the next five to 10 years, traffic will become nightmarish throughout the year, not just during peak tourist seasons.

There is also the question of public safety, i.e., an escape route in the event of a natural disaster like California experienced last year.

The group believes there is no single answer to the traffic problem. Instead the solution will likely come from a series of measures in Big Park, Sedona and the Verde Valley.

With the assistance of Yavapai County’s Assessor’s Office, the Yavapai County Graphic Information Systems (GIS) Department, and especially Supervisor, Randy Garrison, KSM is pulling together a simple three- or four-question survey to gauge the level of support for an alternate route between the Village of Oak Creek and West Sedona and to ask whether those in favor would be willing to pay for it via a special taxing district, a special bond, etc.

The survey will be mailed to approximately 6,500 property owners in August or September.