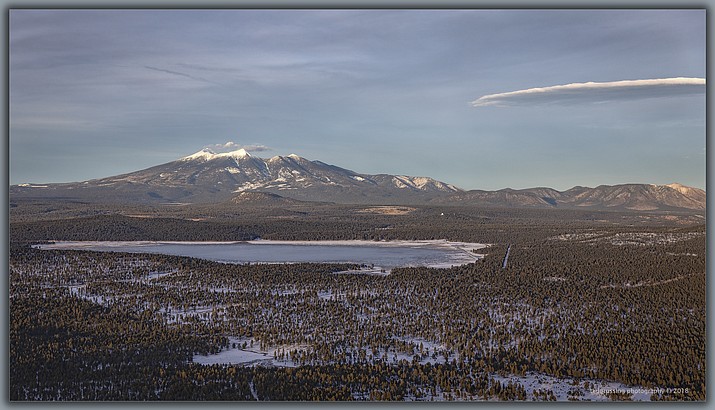 End of day on the Colorado Plateau on January 8th , 2017 … I took this shot on a very high wind day about 20 minutes before sunset and the conditions were phenomenal by anyone’s standards.

In the foreground if Rogers Lake, now a part time seasonal lake, but once, back in the forties and fifties it was a larger lake that had large yachts on it. Just above the right end of the lake you can see the little white dome which is the US Naval Observatory just east of Flagstaff. And S of I-40. From the left on the Horizon you have the San Francisco Peaks … Humphreys, Agassiz, Freemont, Schultz and Doyle. On the right side of the image you have Mt. Elden below the lenticular cloud … actually the lenticular cloud is maybe 15/20 miles east of it, but looks like it is over the mountain. Between the lake and the peaks is A-1 Volcanic cone … the birthplace of A-1 Steak Sauce.

Another quiet day around here and the major excitement was a trip down to Hauser & Hauser Farms in Camp Verde to get some corn, a stop at the Sonic for a cheesecake milk shake and then home. One and I spent about an hour out on the deck before preparing the corn for dinner … it was excellent and much better than the hotdogs and beans that followed. Oh well, such is the food I prepare for myself … it is good though!

Have a good day today … keep breathing and as you think about that, let a smile form on your face, because you are breathing and living and that is simply awesome!

Whatever else you do or forbear, impose upon yourself the task of happiness;

And now and then abandon yourself to the joy of laughter.

And however much you condemn the evil in the world, remember that the world is not all evil;

that somewhere children are at play, as you yourself in the old days; that women still find joy

in the stalwart hearts of men;

And that men, treading with restless feet their many paths, may yet find refuge from the storms of the world

In the cheerful house of love.