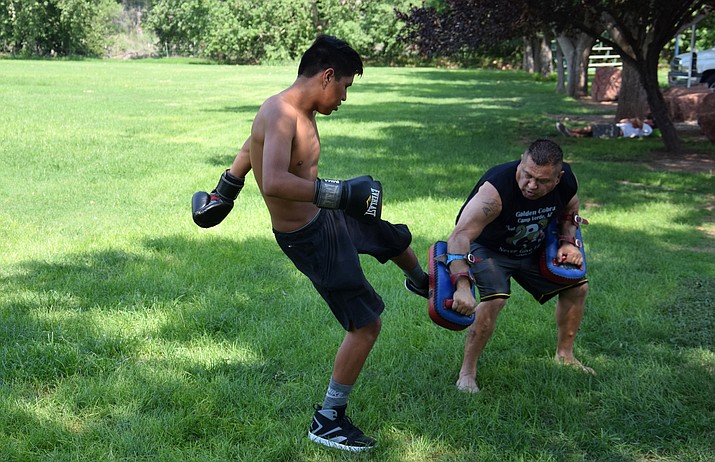 Local fighters and brothers Adam and Avery Hines will look for glory in Florida this weekend.

Adam Hines, 15, and Avery Hines, 14, are from Camp Verde and go to Mingus Union. Starting Friday, they’ll compete at the IKF World Classic in Orlando, Fla.

It is the 20th edition of the tournament and this year it features 221 qualified fighters from states all over the union, plus Canada, Barbados and Uganda.

“It’s going to be a pretty good event because it’s an anniversary event,” trainer Richard Williams said. “Fighters come from all over the world, they come from Puerto Rico, all over because you’re in Florida so some of them that when you fight in Iowa, a lot of these people from outside of the country don’t come to compete, but this is a world classic.”

Adam Hines will compete in the Muay Thai 15-16 year olds super lightweight. There are four other fighters in his division.

“With Adam, he never has an easy fight,” Williams said. “My saying is ‘to be the best, you gotta fight the best’ and we got one of the best in his bracket and it looks like hopefully we’re going to meet with him on Sunday.”

Though that fight card was Williams’ last as a promoter, he may get back into the game to promote Allen.

“We keep in contact, I’m friends with his mom on Facebook,” Williams said. “We’re really good friends and Ray Allen is from Houston, Texas. They got a really nice family, we flew them out here, we hosted them for three days on my last event, he won the US title for my last IKF event here.”

It’s a return to action for Adam Hines, who has grown to 5-10 and 135 pounds. He said his growth isn’t much of an issue.

Williams said the added length is advantage, it adds to his reach.

He’s two inches taller than Allen and the tallest of the five fighters in his bracket. 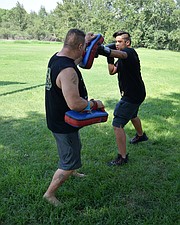 grown about an inch and a half. He worked hard for a month straight at the gym, we’re working resistance, we worked the weight up to 50 pounds, where he is throwing knees and kicks with 50 pound resistance behind him and they’ve just been none stop, so hopefully everything turns out well this time.”

Allen has a 13-1 record and a Taekwondo background.

“It’s going to be a tough fight, we saw some video on him boxing and he’s going to come at Adam’s head, I know it,” Williams said. “I told Adam to keep his hands up.”

Avery Hines, a super middleweight, will fight Muay Thai rules in the points semi where there is no knockdowns. It’s a step gearing up for full contact.

It’s hard to find Avery Hines matches at his weight, 173.

Still, he said it’s pretty exciting to go to the tournament.

They will be in Florida for five days, having left on Tuesday. They’ll go to Disney World.

They have long list of sponsors from around Verde Valley like the Yavapai Apache Nation and Larry Green Chevrolet Hyundai of Cottonwood.

“We’d like to thank all the sponsors through out the Verde Valley that helped us get to where we need to be,” Williams said.

The brothers took some time off but returned with a vengeance this summer.