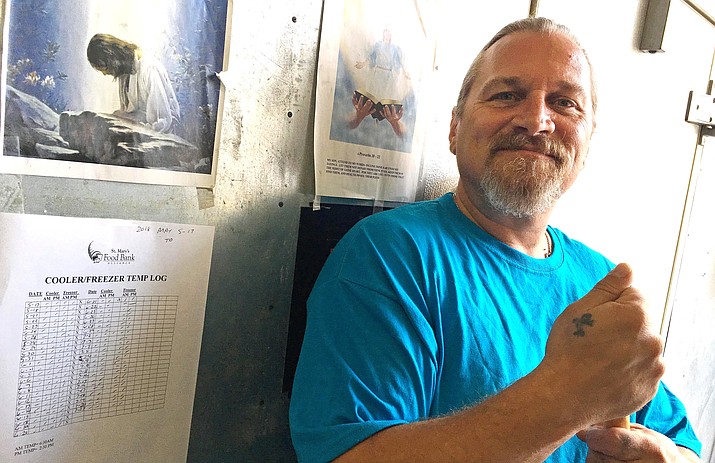 CAMP VERDE – He calls it the “dream building,” Duane Burris does.

On about three acres, this structure would allow Bread of Life Mission to serve both lunch and dinner five days each week, as well as give out care packages full of essential foods for folks to eat.

Perhaps one day the facility would also allow Bread of Life to help people learn more about how to prepare healthy meals.

But Bread of Life always has needs, as do most charitable organizations.

Bread of Life has fed Camp Verde’s hungry for more than 20 years, and Burris, who has been in Camp Verde the past 16 years, has “made a difference in Camp Verde,” says Nikki Miller, one of the board members for Camp Verde Promotions.

“Duane is always extremely helpful and believes in what he is doing,” says Miller.

Burris has been chosen by Camp Verde Promotions to be the grand marshal for this year’s Fort Verde Days parade.

Kick up your heels

The theme for this year’s Fort Verde Days parade is Camp Verde, Kick up your heels.

Each year, the Camp Verde Promotions board brainstorms ideas as it considers who the grand marshal should be.

“It is not a very scientific way to do this, but I think we have selected some great Grand Marshals,” she says.

As Miller says, Bread of Life “is very important in Camp Verde.”

Each Tuesday evening, the Bread of Life Mission serves about 100 hot meals to Camp Verde’s hungry, and gives out about six dozen or so boxes of food to help folks get through the week, until that next hot meal.

“It’s always nice to know that you’re helping people and to hear the appreciation from the people you’re helping,” Burris says. “He said, ‘by the sweat of your brow.’ Those were his exact words.”

That hard work, Burris says, is why his sleeves have a “lot of sweat on them.”

“Work hard, and don’t complain about it,” he says.”

“There’s a lot of people in bad places who need food and need to hear that Jesus loves them,” Burris says.

Which is why Bread of Life is working on programs to follow-up with its clientele.

“Not just to begin, but to maintain that relationship with Jesus,” Burris says.

Many reasons why Burris has a dream, the dream building. To make people’s lives a little bit easier, he says, and a little bit better.

“A lot of people are food insecure,” Burris says.

“Hunger is a tremendous need,” he says.

Perhaps folks who don’t know what Bread of Life is will notice them for the first time this year. Burris says the program’s suppliers “always come through” with what they need to serve hot meals and to fully stock the care packages.

Of course produce, he says, “is seasonal.”

The roughly 100 mouths Bread of Life feeds on Tuesday evenings is “down from the past couple of years,” Burris says.

Burris also relies on the Camp Verde Kiwanis, as well as several churches in Camp Verde and Beaver Creek to come out on a rotating weekly schedule to deliver a short message in between their food preparation, then as they serve the hungry.

At about 10:15 a.m. on Saturday, Oct. 13, the Fort Verde Days parade will begin. Burris won’t be the only Bread of Life representative on their float, he says. Each year, it’s pretty clear which parade entry is Bread of Life. You see Burris and his wife in the truck, and up and down the street, several of the program’s volunteers navigate dollies stacked with boxes of food for the hungry.

This year, Burris says, their load will be a lot easier.

“This year, we get to be the first float,” he says. “I think we’re just going to have all of our folks sit on the bed of a float, so they can relax and not have to work so hard this year. And maybe, we’ll do something a little louder.”

You see, Burris is the drummer of the local band Emanant. Feeding the hungry isn’t the only way that Burris gets his message across.

“We’re spreading the message of Jesus” he says.