New names, new places, new faces at Cottonwood-Oak Creek
New principals at three schools, one school with a new name, and all of the district’s four schools all offer K-8 programming 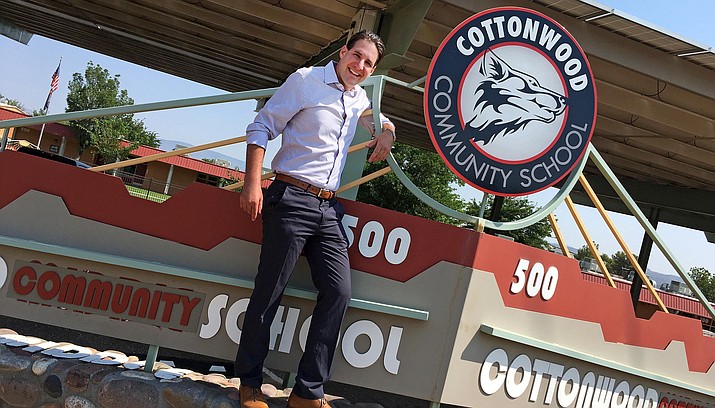 COTTONWOOD – Wednesday morning, a local businessman and his assistant put the finishing touches on the new marquee sign at the school formerly known as Cottonwood Middle School.

Caroline Sepulveda, no stranger to the Verde Valley, spent her morning affixing the new logo to a wall inside Cottonwood Community School’s main office. Just one new word – community – but the school’s principal says it’s far more than just a new moniker.

“The name is symbolic of a lot of what we’re looking to do here,” says Matt Schumacher, the school’s principal, as the district prepares for classes to begin on Wednesday, Aug. 8. “This is a unique opportunity to situate ourselves as the community’s school, and to define what it means to be a community school.”

To Schumacher, it’s about reestablishing not just the belief that the school is a community school, but also the “deep relationships with each other.”

A lobo, which is a wolf, is “part of a pack,” Schumacher says. At Cottonwood Community School, students, parents, teachers, the entire district are learning what that connection means.

“The older lobos have a responsibility to take care of the younger lobos,” he says. “We’re creating a sense of belonging. When you create that sort of climate, they buy into what you’re doing, and they increase their academic success. It’s much bigger than the shirt you put on.”

One change at the newly-named school has come with a bit of controversy. It’s not a uniform, Schumacher says. It’s a dress code. And the school’s adults, Schumacher says, will “make a concerted effort to mirror the dress code, because we’re part of the same pack.”

The principal at Dr. Daniel Bright Elementary School says that C-OC Superintendent Steve King has allowed each of the district’s four schools “autonomy in how they function.”

Says Jessica Vocca, in her first year as DDB principal after coming from the former Cottonwood Elementary School, “equity does not mean the same.”

“We wanted to build two equal schools,” she says. “This is a great opportunity to capitalize on the parental input piece. The biggest piece is the students and their families. I see a future as more geared toward what the child needs.”

So, how does the staff of Dr. Daniel Bright plan to meet the children’s needs?

Last year when King first explored the possibility of having each of the district’s schools becoming K-8, he said it was about building “family-friendly” schools.

For Vocca, the child is the “one who reaps the benefits.”

“It’s what we do. It’s what we’re here for,” Vocca says. “At the end of the day, it goes right back to that children. That should alleviate all the outside pressure.”

A year ago, Nancy Erickson was principal at Dr. Daniel Bright. This year, Erickson is assistant principal, as she works alongside Vocca.

As she takes over at Dr. Daniel Bright, Vocca says that she’s “fortunate to have such a seasoned administrator” in Erickson. “The resources I have at my fingertips, I’m thrilled for this opportunity.”

As the new Oak Creek principal, Persaud says that it is “crucial” to her “that everyone who steps through our doors, students, staff, parents, and community members are excited to be here.”

Says King, Persaud “brings commitment, knowledge, and the ability to develop and sustain relationships to the children and community of Cornville.”

King says that Rhoda is able to balance “high expectations of people” with being “caring and innovative.”

At 5:30 p.m. Tuesday, Aug. 7, the Cottonwood-Oak Creek School District’s governing board will meet at the District Office, located at 1 N. Willard St. in Cottonwood.