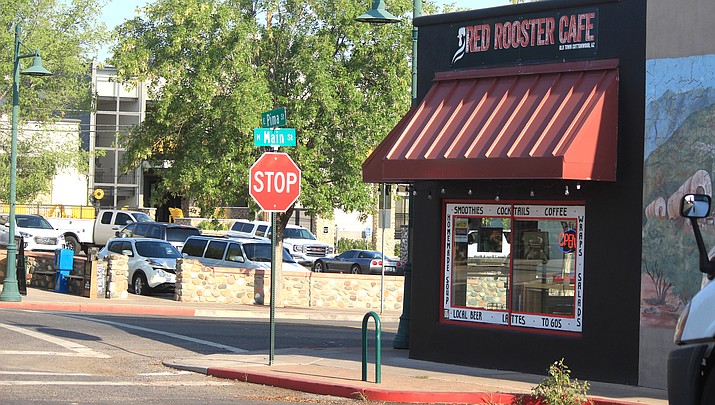 There are currently places to park bicycles on Pima and Main Street in Old Town. There are also parking areas outside the Tavern Grille and the Old Town Square. VVN/Kelcie Grega

COTTONWOOD -- As the City of Cottonwood pedals toward bike-friendliness, groups have been gearing their efforts for more bicycle parking.

Nancy Gotschock, member of the Bicycle Advisory Committee, said during Tuesday’s city council meeting that she believes it is safe to assume that bicycle usage will increase in the area.

“We really want to think about looking ahead at ridership,” she said.

One of the recommendations by the league of American Bicyclists, she said, is to increase the amount of high-quality bicycle parking throughout our community.

According to staff documents, the BAC chose to focus on Old Town where they reached out to local merchants to survey the need for bicycle parking.

There are currently places to park bicycles on Pima and Main Street in Old Town. There are also parking areas outside the Tavern Grille and the Old Town Square.

“None of these parking facilities are very visible from the streets,” Gotschock said. “We’re happy that they’re there but with the bicycle parking ordinance, we’ve set the standard that 10 percent of parking would be devoted to bicycle parking.”

Gotschock said a bike corral is an on-street bicycle parking facility that can accommodate up to 16 bicycles in a parking space.

She said members of the BAC reached out to the Mingus Union High School welding club to see if they’d be interested in building a bicycle corral and they agreed.

“That really took us to the feasibility of this actually happening because we would really only have to pay for the materials,” she said.

After reaching out to the Old Town Association, BAC found that Merkin Vineyards expressed interest in having bike corrals in front of their business.