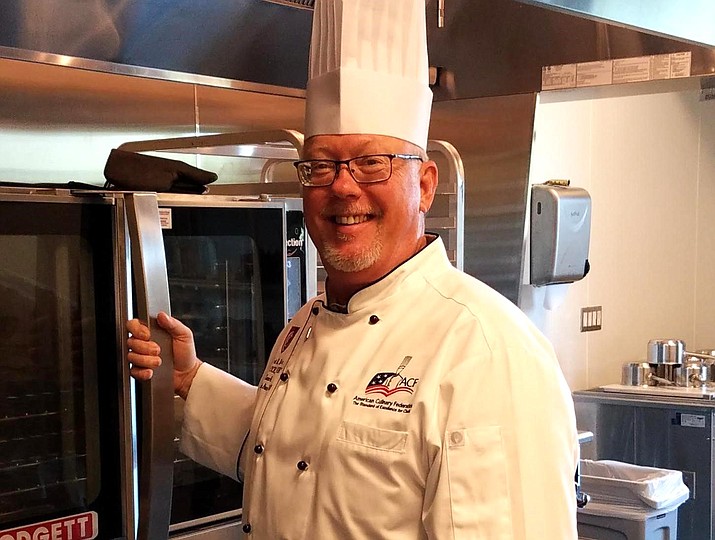 Robert K. Barr, an award-winning executive chef who has worked as instructor, restaurant owner and resort administrator – and who has served as personal chef to Ray Charles, Reba McEntire and former Vice President Dan Quayle – has been selected as Yavapai College’s new Culinary and Hospitality Program Director.

“There is such a huge interest in Culinary Arts and Hospitality. It is the largest industry in the world.” Barr said. “With the great influx of all the cooking shows and competitions, learning this profession is a lifelong quest. Honing one’s skills is a daily task, and keeping it simple is critical, and necessary.”

With 30 years’ experience in every facet of food preparation, service and management, Mr. Barr brings an eclectic resumé to his duties at the Sedona Center. He is the recipient of the Presidential Medallion, as well as a High Gold Medal and multiple silver medals from the American Culinary Federation.

He was named one of 1997’s Best Chefs in America by the Restaurant Hospitality Rating Bureau. Mr. Barr has owned two Nebraska restaurants – including Omaha’s Harvest Café and Wine Bar – overseen regional food service for Resorts Lifestyle Communities, and acted as Dietary Consulting Executive Chef for the NBA’s San Antonio Spurs. He comes to Yavapai College from Le Cordon Bleu cooking school in Scottsdale, where he has served as Chef Instructor since 2015.

He takes the reins of a program as it gains popularity and momentum. Located in the heart of the Sedona resort community, Yavapai College’s Culinary and Hospitality Program boasts two state-of-the-art professional kitchens as part of a 2017 renovation. The expansion reflects an emerging local industry as well as a desire for new students – and industry professionals – to begin or advance their careers in the culinary and hospitality fields.

“The level at which The Culinary Institute at Yavapai College considers culinary arts, and the detail they have put forth in the development of their kitchen Labs, and with the ability to train young culinarians, will exceed expectations, and will rival some of the best Culinary Schools in the country.”