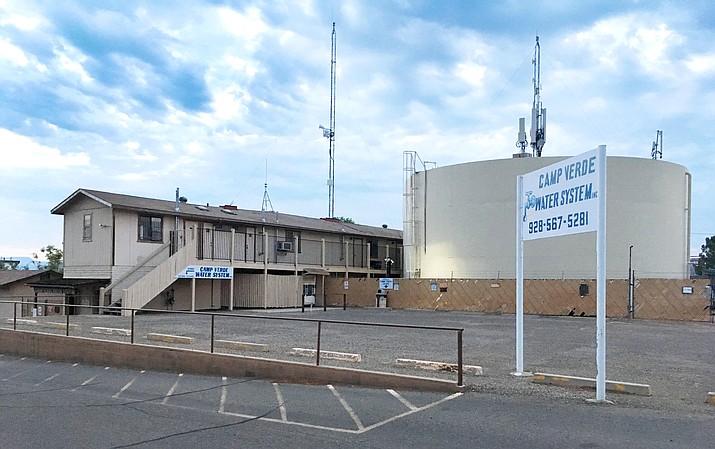 Located at 499 S. 6th St, the Camp Verde Water System will not be owned “in the very near future” by the Town of Camp Verde, according to Town Manager Russ Martin. VVN/Bill Helm

CAMP VERDE – The Town of Camp Verde does not appear to be buying the Camp Verde Water System after all.

“In the very near future, no,” Town Manager Russ Martin said. “A week ago, I would have told you the opposite.”

“It appears that the Town cannot afford to acquire the CVWS (Camp Verde Water System) assets,” company President Stanley Bullard wrote in a letter to Martin. “I believe that it is in the best interest of CVWS to terminate consideration of the LOI (Letter of Interest).”

According to the agenda for council’s Aug. 15 meeting, the Town’s offer is $1.5 million less than what the water company is seeking.

“The purchase price shall be the fair market value price currently determined at $8 million,” stated Bullard in his letter to Martin.

The letter is also in council’s Aug. 15 agenda packet.

Martin said that if the Town was to pay $8 million, the water company would be in a “tight budget annually, with no room for error.”

“At $6.5 million, we’d have a good, reasonable ability to run this, and to fix anything that came along for several years to come, without having a rate increase,” Martin said. “The breaking point for this purchase, going too much further was not going to be a good deal for anyone.”

Should the Town still want to acquire the water company, it would need to consider “condemnation,” Martin said.

The term condemnation is used to describe the formal act of exercising eminent domain over a property, such as the Camp Verde Water System.

In separate conversations, both Martin and Bullard reconciled the possibility of eminent domain.

“We understand the Town has the rights to use eminent domain to acquire the assets of the CVWS,” Bullard stated in his letter. “This would require the Town to do an appraisal of the water system to get an updated fair value which is what the Town must pay for the assets.”

As Bullard stated that the water company would also solicit an updated appraisal, a judge would need to select a figure to be the compensation.

Council will also consider the procurement of budgeted vehicles and equipment for fiscal year 2018-2019.

A copy of the agenda is available at the Town’s website, located at http://www.campverde.az.gov/government/town-clerk/agendas-minutes-actions/2018-town-council.

This meeting is open to the public. At two separate times during the meeting, a Call to the Public is held to provide an opportunity for residents to comment about items not on the agenda.

According to Arizona Revised Statute 38-431-01 (H), council cannot discuss or take legal action on open call comments from the public unless the matters are properly noticed for discussion and legal action.