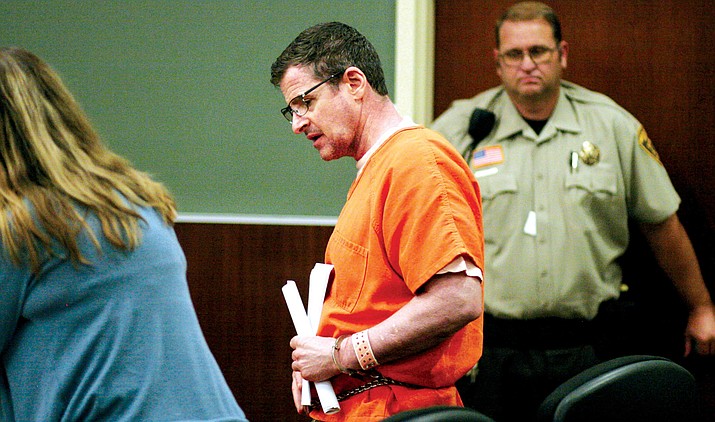 Seth Collins, before he changes his plea to guilty for the 2014 collision on SR 260 that injured Jeremy Hutchinson and his passengers. VVN/Bill Helm

After two hours in court Monday, Seth Collins would not accept a plea agreement.

But he did accept responsibility for the Nov. 21, 2014, collision of his GMC pickup into a 2007 Chevrolet mini-van driven by Jeremy Hutchinson on SR 260.

Collins changed his plea for each of 23 counts, as well as two additional cases charging drug paraphernalia.

A “giant mistake that greatly affected a lot of people” is how Collins’ attorney spoke of the accident that seriously injured Hutchinson and his passengers.

Before Collins changed his plea, his attorney and Yavapai County’s attorneys met in private for close to 45 minutes.

“I don’t think at this point it’s something we can negotiate with the state,” Collins’ attorney, Stephanie Willison told Judge Kottke. “We can throw it on you, throw ourselves on the mercy of the court.”

Once Collins changed his plea, Judge Kottke asked Collins if he had any questions.

“No, your honor,” Collins said.

“Do you understand that once I accept your plea, that you cannot change your mind?” Kottke asked Collins.

Though the charges in the SR 260 accident were many, Willison said that Collins “didn’t make eight decisions to hurt eight people.”

“It’s one mistake and he knows he’s going to have to pay for it,” Willison said.

Though nobody died at the scene of the accident, the unborn son of Hutchinson/Sabrina Champ died on Jan. 17, 2015.

Collins will be sentenced by Judge Jeffrey Paupore at 9 a.m. Wednesday, Sept. 12 at the Yavapai County Superior Court in Camp Verde.