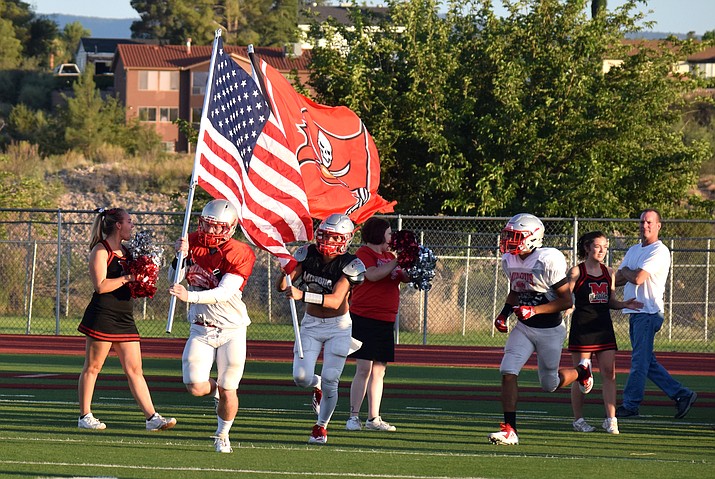 Mingus players run on to the field at the start of the Red and Gray Scrimmage on Aug. 3. VVN/James Kelley

The Robert Ortiz era of Mingus Union football begins on Friday night as the Marauders look to go on another deep playoff run.

It will be the regular season debut of the new head coach and Mingus Union alum’s spread offense.

“It’s looking good, it’s coming together,” Ortiz said. “I mean we put it together at the scrimmage and we just kinda continue to build off of that.”

The Marauders lost four All-Grand Canyon Region selections from last season, including region player of the Tyler Kelly to graduation or their eligibility expiring but they return a lot.

Last year Nelson split carries with Kelly in the backfield but outrushed him, gaining 1,075 yards and scoring more rushing touchdowns, 13. Zabala passed for 1,245 yards, 113.2 per game.

On Wednesday night Ortiz said the Marauders head into the season without anyone out with injury.

Last season Mingus Union won it’s the Grand Canyon Region, its 20th region or section title but the road to repeat is a difficult one.

Although the Marauders open the season with three straight home games, they play only two home GCR games and four away from home.

“I actually think our schedule’s pretty well staggered,” Ortiz said. “I mean I know we start out three in a row and then two away, a couple home and then a couple away, but I think it kinda helps our kids get into the groove of things. I know there’s a lot of people that are excited to come out and see what we are doing, so it’s good for this senior class to start off with three consecutive home games.”

The Grand Canyon media poll selected the Marauders to finish second in the league, behind Bradshaw Mountain.

Since Mingus Union starts their season this week, they get a bye, which will be the first week of October, before they host Bradshaw Mountain.

“Personally I would like to split it up a little more but it is kinda cool our senior year starting off at home,” Streck said.

After playing many key roles last seasons, the class of 2019 is ready to advance Mingus Union deep into the playoffs again.

Ortiz said having an experienced senior class helps a lot.

“It’s good, their experience helps,” Ortiz said. “It helps with everything, knowing that they already know the speed of the game. I commented before that they’re a super smart group, they have high football IQs, so it’s easier for us as coaches to modify or adjust and make explanations to them.”

Plus many of the leaders on defense played as sophomores.

“We have a lot of experience and we know what’s coming for us but we grew up playing ball together so we have a lot of connection we can pull through,” Streck said.

The underclassmen have also impressed Ortiz however.

“They’re doing a great job, the young guys are doing an amazing job getting developed, learning the offense, the defense, the alignments, the assignments and everything so in case we ever need one of them they’re going to be ready to go,” Ortiz said.