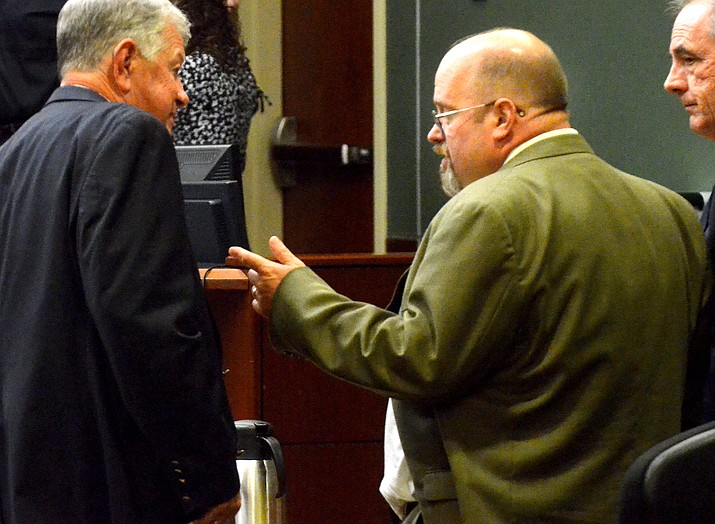 CAMP VERDE – The trial of a former pastor charged with multiple counts of child molestation and assault ended its fourth week Thursday without a verdict.

Thomas Chantry, 48, faces felony charges involving five counts of child molestation and three aggravated assault charges. He is accused of committing these offenses more than 20 years ago while he worked as a pastor at Miller Valley Baptist Church in Prescott. He was 24 at the time.

The jury must decide “guilty” or “not-guilty” on all eight counts.

Accusations by alleged victims include incidents where Chantry disciplined children of the families in his congregation so severely, he left bruises and marks. Some of the abuse later turned into molestation, according to witness testimony.

Chantry, who appeared out of custody throughout the trial, denied all of the allegations during his testimony.

Jurors began deliberations Thursday at 10 a.m. and were sent home at around 4:30 p.m. One juror had travel obligations Friday so the deliberations will reconvene next Tuesday at 9 a.m. at the Yavapai County Superior Court in Camp Verde.

Prosecuting Attorney Susan Eazer requested the release conditions be changed on Chantry as he may be a flight risk due to new evidence she tried to introduce earlier this week.

The evidence concerned a 2004 Illinois police report detailing an incident where Chantry allegedly spanked a child so hard, he left bruises. Superior Court Judge Bradley Astrowsky did not allow the evidence into court as it was late into the trial. Judge Astrowsky also denied Eazer’s motion of changing Chantry’s release conditions.

During the first week of testimony, witnesses described patterns of abuse and molestation.

Before closing arguments the State brought in the grandmother of one of the alleged victims who was also Chantry’s secretary at the time the accusations took place.

The grandmother testified she watched Chantry leave his office to spank someone else’s grandson. She said she remembers seeing Chantry take off his belt as he left his office.

During Eazer’s closing arguments, she went over the evidence in each of the alleged victim’s testimony. Eazer said there is not only beyond a reasonable doubt, but any doubt that Chantry committed offenses of child assault and molestation.

The first witness called to the stand was a 21-year-old man who described being touched on the genitals by Chantry for about 10 minutes when he was around 4 years old.

“[Chantry] told me not to tell my parents,” he said.

In an emotional testimony, one man described incidents where Chantry would spank him and molest him during tutoring sessions. He said he remembers being 10 or 11 when the molestations took place.

He said after the spankings, he would try to rub his rear to sooth himself. He said Chantry forbade him from comforting himself.

“I wasn’t allowed to do it because he gave me the pain,” he said. “He said it was OK for him to do it since he delivered the punishment.”

The man said Chantry would rub his bottom for several minutes and eventually start rubbing his genitals.

“He compared himself to the way God controls things,” he said. “He said disobeying him was disobeying God.”

The man said the incidents involving Chantry have impacted his faith.

Although most of Chantry’s victims were young boys, one female witness described an incident where Chantry spanked her so hard when she was a little girl, it took her breath away.

“How did the system get so twisted?”

During Sears’ closing arguments, he outlined inconsistencies in the prosecution’s timeline of events. He also theorized instances of honest, false memories.

“The person who has never changed or embellished his story in any way is [Chantry]” he said.

Sears said Chantry has been casted as a “liar” for standing up for what he believes in.

“How did the system get so twisted?” he said.

Sears went on to describe Prescott Police investigation into Chantry as poorly handled and “embarrassing.”

Earlier in the trial, he said that while he didn’t believe the accusers in the case were necessarily lying, he believes false memories have come into play.

“We think that many, if not all the victims have honest false memories,” he said.

Throughout the trial, the Association of Reformed Baptist Churches’ investigation into Chantry’s misconduct was mentioned. During that investigation more than 20 years ago, nothing was reported to the police.

Tuesday, Judge Astrowsky warned both counselors to not derail too much into ARBCA as they are not being tried in this case.

“If this were a trial of ARBCA, they’d be convicted,” he said. “But that’s not what this trial is about.”

“It’s a good thing ARBCA isn’t on trial in this case,” she said. “They should but they aren’t.”