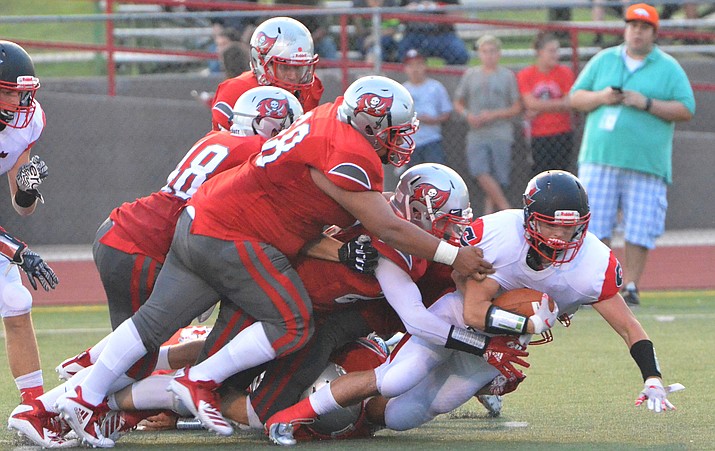 Nearly everything went right for new Mingus Union football head coach Robert Ortiz in his first game on Friday night but there is one thing he missed.

As the clock expired in the Marauders 53-14 win over San Tan Valley Combs, senior running back Alex Nelson and senior lineman Domanic MacColley snuck up on Ortiz and poured the water from a Gatorade jug onto the rookie coach.

“(laughs) Honestly I didn’t see it coming, so they got me good on that one. Nah it’s a good feeling,” Ortiz said.

Ortiz, a Mingus Union alumnus, took over the program after his mentor and long time Marauder head coach Bob Young retired from MUHS in the spring.

“It was a good time,” Nelson said about his and MacColley sideline shower moves.

Mingus Union jumped out to a 25-0 lead in the first quarter, enough to get the win despite a couple Coyote scores in the second quarter.

“Overall I thought it went really well,” Ortiz said. “Got a little scared there, a little nervous there at one point but we executed on a high level (Friday) night,. The kids put the pieces together. I think what these kids did (Friday) night was a great thing for us, the school, the staff, the community, so just keep building on that one.”

The win also snapped Mingus’ seven-game losing streak to teams outside the Grand Canyon Region. Including the playoffs, the Marauders’ last win over a non-region foe was on Sept. 9, 2016 when they beat Glendale Cactus 35-28.

Senior quarterback Antoine Zabala said they were thinking about the streak before the game.

“I did very well reading blocks,” Nelson said. “I wouldn’t have done nothing without my blockers. Shout out to Gabe, shout out to Kiki, they’re all busting their butts for me and it’s all on them honestly.”

The rushing yardage came despite senior lineman Ivan Martinez, who was All-Region last year, being out.

“I couldn’t thank my O-line enough,” Zabala said. “We had one of our stars out, he couldn’t play this first game, but my line is amazing. I think we have the best line in the state and Alex is one of the best running backs I think I’ve ever seen, so we’re going to do just fine this year.”

Nelson opened up the scoring with a 10-yard touchdown run on the Marauders’ first possession. They went on defense first and after forcing a Coyote three and out, took the ball down the field.

“It was a success,” Nelson said about the first game. “Our starters were a little tired but we pursued through and just had a good time. We’re having so much fun out there and that’s what matters.”

Mingus Union’s next three scores were from passes, a two-yard strike to senior tight end/linebacker Kendrew Streck, then a 23-yard touchdown reception by Nelson and then a 30-yard score on a pass to Streck.

“That’s everything we could have asked for, our coaches always told us we’re starting a little slow, we start slow and we came out here we started really strong, really fast and that was really good motivation for our team and our stance,” Zabala said.

The game was the debut of Ortiz’s up-tempo spread offense. The Marauders move so fast that sometimes they were ready to go before the snap before the officials were ready.

“It’s what I love, it’s what I love to do, it’s why I play football, to sling the football around and honestly I think I’m pretty good at it, but I couldn’t do it without my coaches, without my line, without my receivers, backs, my whole team really counts on us,” Zabala said. “It’s really cool.”

After a first quarter where the Marauders were on pace to score 100 points, Combs got back into the game in second. They got on the board with a two-yard quarterback sneak.

However, Mingus Union scored again on a three-yard run by Zabala after a 58-yard run by Nelson. The Coyotes struck back with a 96-yard kick off return touchdown but Nelson responded with a four-yard TD run.

In the third quarter Mingus Union found itself in the shadow of the Combs end zone after a Nelson interception but the Coyotes intercepted a pass in the end zone. Nelson would add anther score with on a 15-yard run.

“They were just honestly mental mistakes, we knew what to do, what to say, how to correct them,” Zabala said. “We’ll for sure clean those up and it will look a lot better next week.”

In the fourth quarter, junior Nick Bessler scored on a four-yard pass.

The Marauders return to action on Friday when they host Show Low (0-1) at 7 p.m. The 3A Cougars dropped their season opener 21-14 to Eagar Round Valley at home.

“I know what these kids are capable of, I really do, I know that they’re capable of playing and executing on a high level and I think now that the expectation’s set, the standard’s set high,” Ortiz said. “We had a lot of mental mistakes, a lot of simple penalties that we could’ve avoided, so I think once we kinda clean that up, you’ll see even better output.”