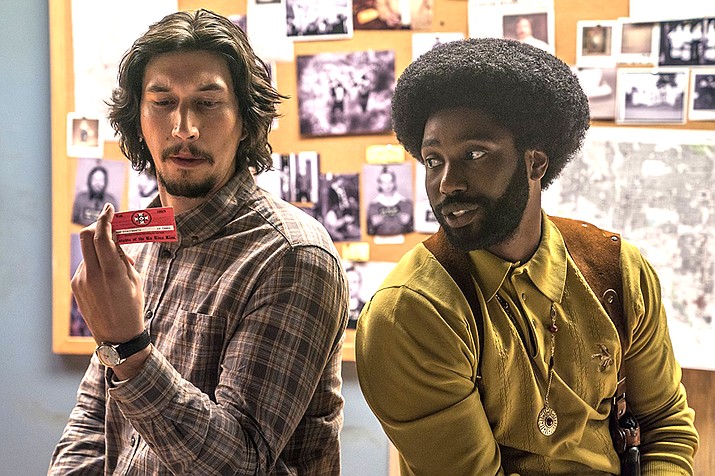 BLACKkKLANSMAN stars John David Washington, who portrays Ron Stallworth, a young, educated black man who wanted to be a law enforcement officer. He was the first black man hired by the Colorado Springs city police department.

BLACKkKLANSMAN is based on a true story of events in Colorado Springs in the 1970’s. It deals with the conflict between the Ku Klux Klan and the city police. The Klan is devoted to the racist view that only white Americans belong here and all others — Latinos, Jews, Asians and especially African -Americans — should be suppressed or removed.

BLACKkKLANSMAN takes us through various aspects of the Klan’s plan to eradicate the black citizen’s caucus. And we follow the police steps to prevent that. There is a good deal of suspense and tension in the film after two police detectives undertake a tricky path to infiltrate the Klan.

Ron Stallworth (John David Washington) was a young, educated black man who wanted to be a law enforcement officer. He was the first black man hired by the Colorado Springs city police department.

BLACKkKLANSMAN is the story of how he led the incredibly complicated scheme to undermine the worst efforts of the Klan in Colorado Springs.

Stallworth is hired after some intensive examination by the police chiefs. He is assigned to a mindless post where the work is boring and very trivial. He ultimately talks his way out of that job into something more meaningful.

When it is announced that Stokely Carmichael is coming to Colorado Springs to address the organization that is actively opposing the KKK, there is concern that violence may take place. Stallworth devises a plan to attend the meeting as a member of the black student group.

He goes and meets the president, Patrice Dumas (Laura Harrier). They become friendly, although she is totally devoted to the cause. The speech by Kwame Ture (Carmichael’s adopted name, played by Corey Hawkins) is powerful and very stirring.

One of the other cops in the group with whom Ron Stallworth has become friendly is Flip Zimmerman (Adam Driver). He is also opposed to the entire KKK world and offers to help Stallworth.

Flip is a Caucasian Jew, but does not practice the religion at all. The plan they put together is to have Ron speak to the KKK on the phone and convince them he is a white man eager to join the KKK effort. That works. When he has to appear at a meeting, Flip shows up as Ron Stallworth.

The scheme works very well. Both Ron and Flip have no problem belittling and cursing all non-whites in America when they are with KKK members. Flip is so convincing, he is eventually promoted to be the president of the KKK chapter.

They are successful in being accepted into the KKK; Ron on the telephone and Flip in person, even dealing with visitor David Duke, the national head of the Klan.

The film is a little long, but never slow or boring. All the actors are excellent, with special kudos to John David Washington as Ron Stallworth, Topher Grace as David Duke, and to Adam Driver for a truly brilliant portrayal as Flip.

You may feel that Spike Lee is touching on the current situation here in U.S.— well. No matter, it is a first-rate written and produced drama.

BLACKkKLANSMAN is at Harkins Sedona 6 Theater.