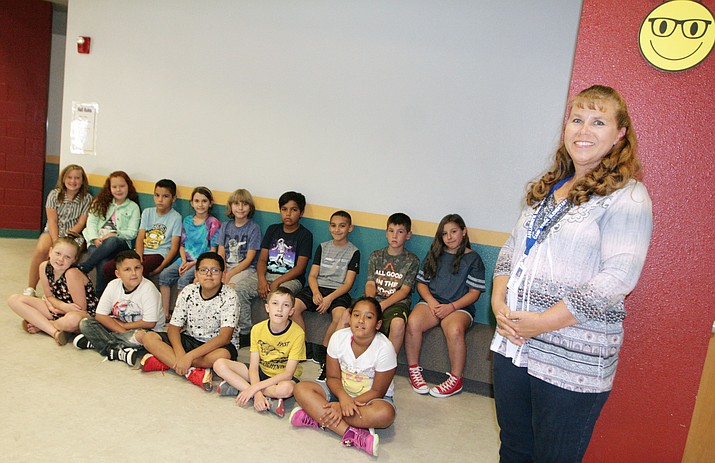 It’s the only school – and the only demographic – that Howe has taught.

“Melissa has a great attitude. She is always willing to jump in and do anything asked of her. She is remarkable with her students. They love her,” Booth says.

Booth also says that when she used to teach, she noticed “how happy her students were.”

“They were always doing great hands-on projects and seemed to be enjoying school immensely,” Booth says. “As a principal, I now know understand so much more about Mrs. Howe’s approach to teaching.  She truly empowers her students to take charge of their own learning.

“She has a kind heart and connects with them wherever they may be in the learning process and in life,” Booth says. “She is empathetic while still requiring the best of her students.”

Thirty years ago, Howe began working at Bashas’ to pay for college.

During summer and on holiday breaks, she still works at the Camp Verde grocer.

“If I wasn’t a teacher,” Howe says, “I would probably work at Bashas’ full time.”

Howe says that last year’s classroom “came up with the acronym RAK, which stands for Random Act of Kindness.”

“Students were often asked to do a RAK as weekend homework,” Howe says. “It could be something as small as holding open the door for someone at the post office, or helping someone if they dropped something.

“At home it could be doing something to help out without being asked to do it,” Howe says.

Howe says she plans to continue with the RAK program this year.

“It’s great for kids to do something kind for others without expecting anything in return, she says.

“I guess you could say my teaching style is a hybrid style. Not all kids learn the same. What works for one class may not work for another, so I have to be flexible and willing to try different styles and strategies, depending on the class.”

Camp Verde Elementary Principal Britta Booth says that Howe is “calm in the middle of the craziest of days.”

“She makes everyone’s day better,” Booth says. “She is always smiling and engaging with everyone. Her energy is endless.”

“My class gives back to the community every year. For the past 20 years, my class has done a fundraiser to adopt at least one family in need at Christmas through the Adopt-A-Family program. I want my students to see how important it is to help others.”

“I grew up in Gilbert, when Gilbert was a small town similar to Camp Verde. I love the small town atmosphere of knowing people when you make a stop in town. I love having local farms, livestock and life experiences for kids that big city kids will never have.”