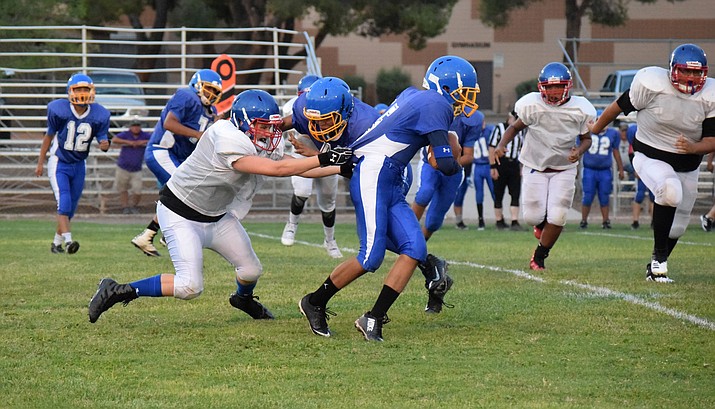 A new era for Camp Verde High football starts on Friday night as the Cowboys debut their new head coach, new offense and defense and a host of new players.

The Rick Walsworth era at Camp Verde begins on Friday when the Cowboys open the season against Scottsdale Prep at Paradise Valley High School at 7 p.m.

“We’re out working hard, trying to get better,” the head coach said. “Thursday night was good, it gave a lot of practice against anybody because we don’t get to go live against ourselves, we found a lot of stuff we need to work on.”

The Cowboys’ home opener is Aug. 31 against Heritage Academy Laveen.

“Since the scrimmage we’ve actually improved quite a bit, I’m quite impressed with them,” senior quarterback Steven Petty said. “We’re working with a lot of new talent and a lot of new kids and they’re learning really well.”

Last season Petty was a receiver but this year moved to quarterback as the Cowboys changed to the flexbone/triple option offense that Walsworth used to light up the scoreboard when he coached at Mingus Union and Sedona Red Rock.

Petty said it’s been stressful in his first year at quarterback but his teammates have made the transition easy.

“I’ve seen this offense before and it’s been a pain to defend against, so I’m definitely a fan of it,” Petty said. “So I think we’re gonna have a good year with it.”

However, they return lineman Braden Schuh, who was on the first and second all-region teams and lineman Tristian Stanfield, a second teamer.

“There’s lots of guys that are returning that are coming out and working hard Cale’s a returner, Braden Schuh, hopefully his shoulder was okay (Tuesday) Josh Lake, Peyton Kelley, we got a lot guys that are coming back, just a lot of them are younger, we got guys that played as freshmen last year that will be sophomores now,” Walsworth said.

Cook said the Cowboys’ chemistry is really good this year, better than last year’s and the younger teammates should lead CV to a bright future.

“We’re doing pretty good, we got some good players but we have a lot of freshmen, so we’ll do better next year if we keep all these players,” Cook said.

This season the Cowboys move from the 2A Central to the 2A Verde. Last season they went 3-6 and 2-3 in the region, finishing fifth.

This year’s schedule features a lot of new names.

“I like it, it’s a new challenge, different people, you don’t know who you’re gonna meet so I like the change,” Petty said.

The AIA tried to balance the regions in football to make them more competitive with this season’s start of a two-year scheduling cycle.

“I think it’s good, last year we had some pretty hard teams and this year after looking the other teams and their plays and stuff I think we’ll do good,” Cook said.

The Cowboys enter this week healthy. Schuh left the scrimmage with an upper body injury but returned to practice this week.