$4.2 million on table to make safety improvements to Cornville Road 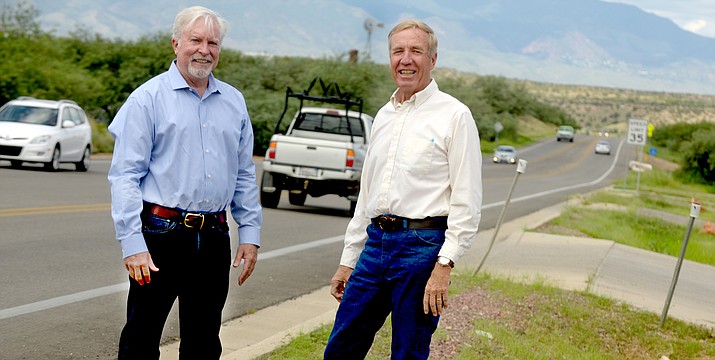 Part of the improvements will be at the top of the switchbacks entering Cornville near the flashing speed light, an area that has been the site of several bad accidents, Garrison said.

But the bulk of the improvements will be on the winding stretch of Cornville Road, east of Page Springs Road to Beaverhead Flat Road, which has no break-down lane, he said. There is no shoulder and the guard rail runs right along the road, he said.

“They’re going to go through there and widen the whole road,” Garrison continued. “Put in shoulders, move the guardrails back, cut the slopes back so the drainage works better, and make that section safe.”

“The road’s narrow, the speeds are high,” he continued. “It’s all safety.”

Thurman said they would also make room for bicycles.

The supervisors pointed to two fatal accidents on the road the prompted them to seek the safety improvement funds - one accident being near the upper switchbacks and one accident in which a bicyclist was killed when struck by a vehicle near Beaverhead Flat Road.

The project is actually in Thurman’s Supervisory District, but it abuts Garrison’s District 3 District and all Verde Valley traffic would be affected, Garrison said.

The supervisors recently announced a long-range plan to connect Beaverhead Flat Road in Cornville to SR260 on the Camp Verde/Cottonwood side. The new connector road would cross the Verde River and come out somewhere between the two roundabouts at the Out of Africa Wildlife Park and Thousand Trails Road.

Any improvements on Cornville Road will help this new Beaverhead Flat Road to SR260 connector when it is eventually built, Garrison said. Right now, the SR260 connector project is only in the initial planning process and they don’t have the estimated $25 million in the funding yet for the bridge and entire road.

“We’re trying to improve the flows where we can,” Garrison said. “There’s no one-quick fix for any of this stuff.”

Garrison and Thurman thought the Cornville Road project construction will start next spring or fall, and the Beaverhead Flat extension study will be complete this spring.

“Everything we are doing is proactive, instead of reactive,” Garrison said. “You know Sedona is in a reactive mode right now, but this is all proactive.We’re really trying to get ahead of it.”