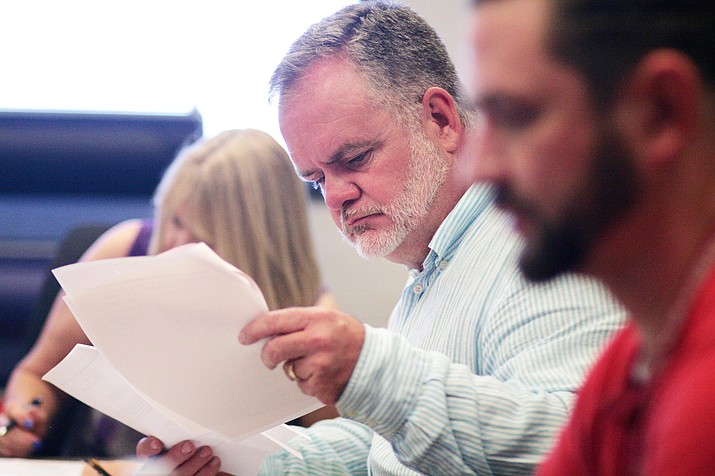 The Mingus Union School Board voted 5-to-0 Monday in a special meeting that the district “has a right to object to consolidation,” said board member Jim Ledbetter, pictured.

COTTONWOOD – Yavapai County Presiding Superior Court Judge David Mackey’s ruling for a compromise in the Mingus Union lawsuit was “a win, all the way across, for the community,” said Mingus Union board member Steve Gesell.

But the Board, after more than 30 minutes in executive session, agreed that the district should retain the right to not support a merger with the Cottonwood-Oak Creek School District.

Shortly after Mingus Union’s board made its 5-to-0 vote to make changes to the third paragraph of Judge Mackey’s ruling, the Mingus Union district’s attorneys stepped into a status conference to tell Judge Mackey of the board’s decision.

According to Yavapai County School Superintendent Tim Carter, “after a significant amount of discussion and disagreement among the lawyers, Judge Mackey affirmed the settlement agreement and ruled that the new wording provided by the Mingus Union School Board “was not a material change to the original agreement.”

According to a draft of the Mingus Union School Board’s Aug. 27 agenda, Ledbetter motioned for a change to the third paragraph in Judge Mackey’s Aug. 24 ruling, that “Plaintiffs will not challenge the constitutionality of A.R.S. § 15-459(B)(7) or the form of the petition, and the petition’s language once agreed upon by the parties and the Court, but will not waive their rights to oppose consolidation.”

The original wording in the third paragraph of Mackey’s ruling stated that “Plaintiffs will not legally challenge any future consolidation effort using this petition form in any future election cycle.”

Although Judge Mackey’s ruling cancels the Nov. 6 consolidation election, a status conference has been scheduled for 2 p.m. in Prescott on Sept. 5, Carter said.

“The judge has requested the lawyers draft the language for future consolidation petitions that he would ultimately consider, modify as needed, and approve,” Carter said.