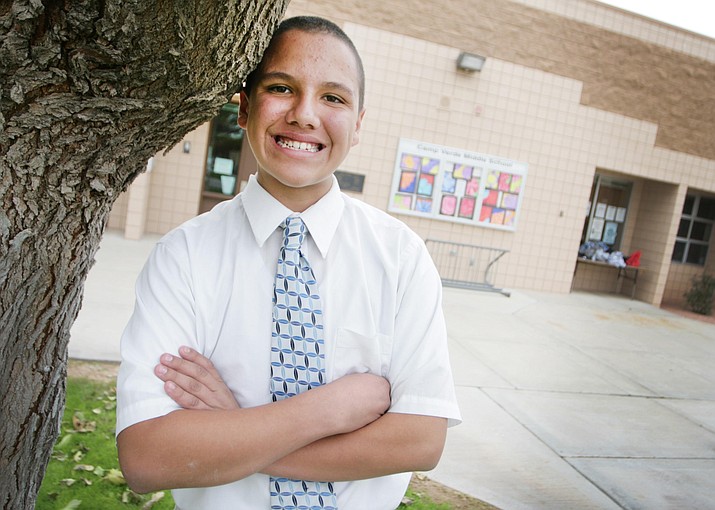 Now at 13, Plante is a month away from his eighth consecutive MLK Day march.

Giving back to his community – and trying to make the world a better place – are things near and dear to the Camp Verde Middle Schooler.

On Nov. 27, Chandler received the TruStage Community Spark Award, one of 20 children nationwide to be recognized for their charitable spirit.

“It takes a special person to recognize at a young age that they have the power to make the world a better place,” Susan Sachatello, TruStage’s senior vice president said in a press release. “The Community Spark Awards allow us to shine a spotlight on inspiring young leaders such as Chandler who is helping his community build a brighter future.”

For Chandler, it began at 4 years of age when his parents took him to the Camp Verde Community Library to volunteer at a Martin Luther King, Jr. service project.

Chandler recently raised more than $5,800 to bring a swing for the disabled to Butler Park, a project that began when he approached Town Council for approval.

In addition to selecting Chandler as a Community Spark Award winner, TruStage donated $1,000 to the Camp Verde Special Olympics/Special Olympics Arizona on Nov. 27.

Chandler has also collected more than 50 bicycles for each of the past two years through Recycle Your Bicycle, an organization who gives bikes to foster children.

Chandler also volunteers at Cottonwood’s Rising Hope Food Pantry, offers free lawn service for the handicapped and elderly, and organizes food and clothing drives to help the homeless and families in need.

As he looks to the future, Chandler says he wants to one day build the largest homeless shelter.

“I don’t want to be the top dog, I just want to help out as much as I can and inspire others to help,” Chandler said.

Winners were selected by a panel of their peers from the Dane County, Wisconsin Boys & Girls Club.

Visit www.trustage.com/spark to read more about Chandler Plante and the other 19 Community Spark Award winners.