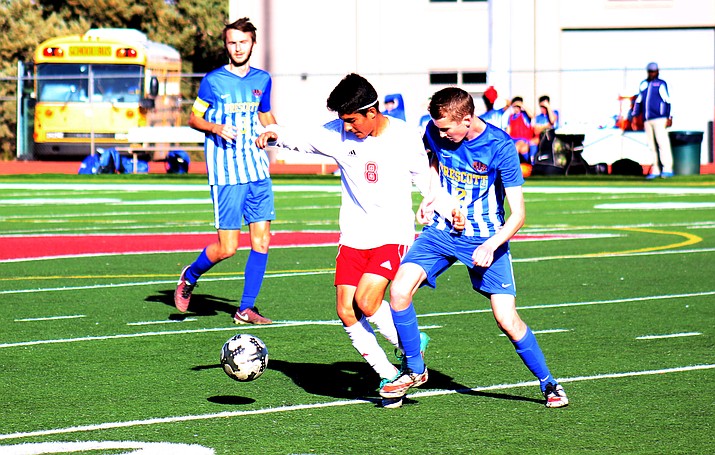 A familiar face has returned to try and lead Mingus Union boys soccer back to the playoffs.

Hernandez was first team All-Section and honorable mention All-State in 2016. In 2014-15 he was on the Mingus Union team that went 7-0 in their section (now region) and the 2013-14 side that went 8-1 in the section, with both making the state quarterfinals.

Former Mingus Union boys head coach and current girls head coach Calvin Behlow said Hernandez is one the top three favorite players he has coached and is the most knowledgeable.

“Oh man, that’s a dream come true for me and him. I’ve been coaching Pollo since he was eight years old,” Calvin Behlow said about Hernandez taking over the boys head coaching job. “Pollo is definitely the most knowledgeable soccer player I’ve ever had. And I love that he’s holding those boys accountable. I love that he’s being hard nosed with them, that he’s not letting them get away with stuff that they thought ‘oh yeah an easy coach coming in.’ You come to one of his practices and it’s tight ship. Man I’m jealous of that team, I wish I could pay for Pollo. He’s a great coach.”

Hernandez is excited about his first Mingus Union team.

Hernandez said he thinks his age will help him coach because soccer changes so much.

“Every five years the style of soccer changes, there’s new ways in going out there playing,” Hernandez said. “I think I have a good benefit because school wise I was here not too long ago and I know a lot of the teachers that are still here, I know classes that they’re taking, stuff like that, so I think I’m going to help them out in both school and soccer wise, which I really excited for it to start

Once again the Marauders program proved popular, with dozens of kids coming out, but they only have two boys teams to fit them on.

“This year we had around 60 kids try out,” Hernandez said. “We only have 30 roster spots so it was crazy. We had to make cuts, which sucked but I encourage them to come out next year.”

The Marauders lost first team All-Grand Canyon Cayden Ontiveros and Eric Samano, plus Kevin Ornelas from the second team and Ezekiel Behlow, who likely would have been All-Region had be not suffered a season ending injury last December.

Hernandez said though the Marauders are balanced in terms of talent, he expects them to be an attacking team.

“We have a lot of attacking players, that’s going to be our main focus, we’re going to attack,” Hernandez said. “We’re going out there to school goals, we want to win games. We’re going to be more of an attacking than defensive team but that’s not us counting out the defense we have, we have a really good defense, they’ve matured, they’re older.”

Garcia-Hernandez is expected to lead that team.

Last year the Marauders finished third in the region, which Hernandez expects to be strong again.

The Marauders’ home opener is Friday against Peoria at 5 p.m.