Beaver Creek to swear in new, returning school board members 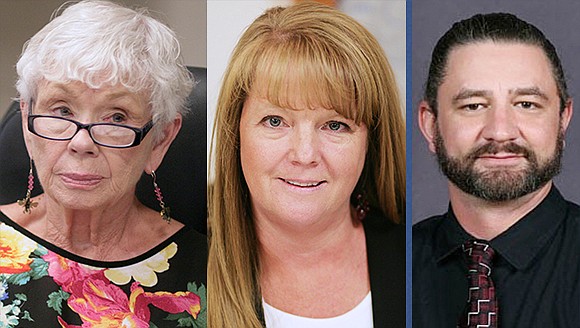 RIMROCK – Both residents of the Beaver Creek community, Brandi Bateman and Daniel Dubien have professional experience as executive assistant to a school district’s superintendent.

Bateman, formerly employed at Mingus Union High School District, and Dubien, currently employed by the district, will join incumbent Betty Hart Monday, as the three will be sworn in on the Beaver Creek School Board.

For Karin Ward, Beaver Creek’s superintendent, “knowledge for how boards work, and their policies” will benefit the two new board members as they join Hart, as well as fellow board members Jackie Harshman and Perry Krowne.

Though Yavapai County School Superintendent Tim Carter will be present Monday to swear in the three board members, Bateman and Dubien will not join the Beaver Creek School Board until Jan. 1, when they will officially replace Jo Burke and Karen DuFresne.

“I’ll miss them tremendously,” Ward said of Burke and DuFresne.

Ward said that Burke, a former teacher and principal, brought an “administrative understanding to board action.”

A parent in the Beaver Creek community, DuFresne was also active in the school’s Parent Teacher Organization and once worked in the district as a clerk and bookkeeper.

“When she came to the board, she understood school offices and budgets,” Ward said. “And she continues to have a passion for school success stories.”

Both Burke and DuFresne were appointed to the Beaver Creek School Board on July 1, 2010 due to the resignations of Norma Dieffenbach and Bill Palmer.

Burke and DuFresne then ran in the election later that year and won their seats.

With a D-grade this year in the Arizona Department of Education’s annual A-to-F evaluations, the Beaver Creek School Board will hear a Continuous Improvement Update from both Ward and Principal Katrina Sacco.

Sacco will discuss the school’s individualized goal setting as it pertains to students in grades 5-8.

“In the future,” Sacco said, “we could expand the individualized goals to grades 3 and 4.”

Sacco, Ward and Allie Wheeler have been “sitting down with kids and setting goals,” Ward said.

Ward also said that she, Sacco and Wheeler will “meet with students again in January during parent-teacher conferences to see how they did in our midterm assessments.”

Ward said she has met “mostly with eighth grade students,” while Sacco and Wheeler have met with students in grades 5-7.

At 6 p.m. Monday, the Beaver Creek School Board will hold its regularly scheduled monthly meeting in the district’s governing board room.

A copy of the Dec. 10 agenda will be available within 24 hours of the 5 p.m. work study session at http://www.bcs.k12.az.us/Governing_Board.