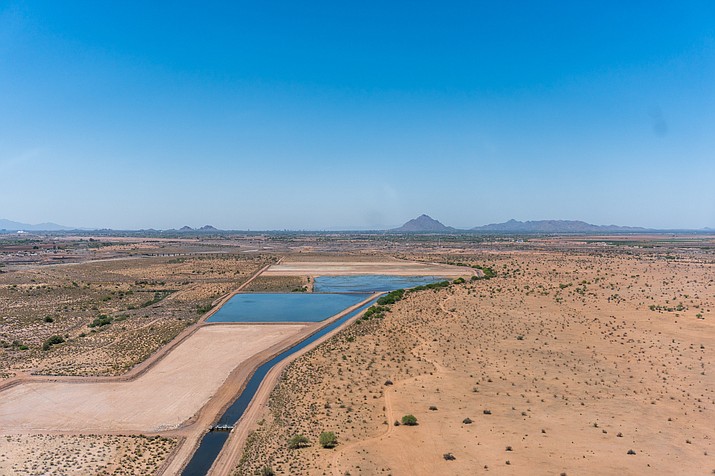 Arizona water managers have been recharging aquifers for years, “banking” water for future use. The Drought Contingency Plan now being negotiated would further such efforts. (File photo by Daria Kadovik/Cronkite News)

PHOENIX -- Gov. Doug Ducey threatened to veto any drought contingency plan that does not equitably divide up the pain of Arizona having less water in 2020 and eventually leads to lower water use in the state.

The vow, the governor’s strongest statement to date on the issue, comes as the key players in crafting a plan appear to be circling around an agreement of who loses water when the state is forced to reduce the amount it can draw from Lake Mead and the Colorado River.

“Several details need to be worked out,’’ Ducey told those attending a water conference here. “But we are very close.’’

But Ducey also acknowledged that there are diverse interests who have their own ideas about how to allocate the water and who should be forced to take a larger share of the cuts, deriding them as “other, more simplistic plans.’’ And the political reality is that any plan and the funding to support it has to be approved by the Legislature with 90 members each beholden to certain constituencies.

Those, the governor said, would be dead on arrival at his office.

“I will reject any plan or policy that comes across my desk if it fails to adhere to the principles I’ve outlined,’’ he said.

Those, he said, include protecting Lake Mead and balancing the interests of all water users.

And there’s something else. Ducey said any plan, to be acceptable, has to acknowledge this isn’t just a stop-gap measure. He said a key element of the plan has to be the state “transitioning to a dryer future .’’

Ducey also defended one key element which would have the federal government provide at least $30 million to drill new wells in Pinal County and the ditches and pipes to deliver the water to farmers.

The governor acknowledged that one of the key goals of the state’s historic 1980 Groundwater Code was to reduce groundwater pumping in several areas of the state. That included establishing several “active management areas.’’

For the Phoenix, Tucson and Prescott areas, that goal is “safe yield’’ by 2025, with the amount of water being pumped out equal to what is replaced.

In the Pinal AMA, however, the aim is to preserve agriculture for as long as possible while also ensuring there is enough groundwater for future residential development. Ducey said it makes sense to give farmers access to more groundwater now to make up for them having to absorb much of the loss of Colorado River water.

“Pinal County has been growing,’’ the governor explained, with 70 percent of current water use going to agriculture. At the same time, Ducey said, the county is experiencing “a very robust net growth of individuals who are building homes.’’

“And there’s a water need there as well,’’ he said.

That, however, was not supposed to take place for years. But if Arizona is allowed to draw less water from Lake Mead, the farmers would end up taking the brunt of the burden if they do not get access to new supplies of groundwater, at least for some period into the future.

But even with the new wells -- assuming the federal funds develop -- the amount of farmland in the area still could be cut by 40 percent.

At the root of the issue is that Arizona, under long-term deals with other states, gets about 40 percent of its water from the Colorado River.

That did not become a problem until it became evident that the plans were crafted in years of abundant supply. Now, with a drought, Lake Mead is virtually certain to drop below 1,075 feet above sea level in 2020, the point at which those deals require Arizona to cut its use.

What’s different now, said Ducey, is how the states and Mexico, which are entitled to allocations are dealing with the problem.

“Historically, issues surrounding the Colorado River were resolved through conflict and litigation,’’ the governor said. “We’re attempting to do something different today, and that’s work collaboratively.’’

That, then, leads to crafting a drought contingency plan that Ducey said is designed to be acceptable to all the “stakeholders’’ who have a claim on the water. More to the point, the governor said once those stakeholders reach a plan they have to be united in urging lawmakers to ratify it, without alterations.

Ducey conceded this could prove difficult with each of the water users having its own wants and needs. But he said those needs “must be balanced with the overall needs of the state.’’