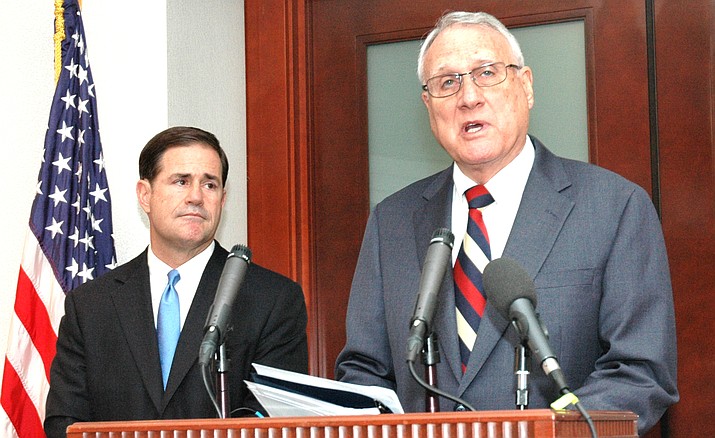 Then-U.S. Sen. Jon Kyl speaks with Arizona Gov. Doug Ducey. Kyl, who is now retired, said having the public on your side is the most important part of an impeachment inquiry. Howard Fischer/Capitol Media Services file photo

PHOENIX -- Saying his commitment was only until the end of the year, Jon Kyl is stepping down from the Senate seat to which he was named less than four months ago.

"When I accepted your appointment, I agreed to complete the work of the 115th Congress and then reevaluate continuing to serve,'' Kyl wrote in a letter delivered Thursday to Gov. Doug Ducey.

"I have concluded that it would be best if I resign so that your new appointee can begin the new term with all other senators in January 2019 and can serve a full two (potentially four) years,'' Kyl continued. That refers to the fact that while the term of John McCain, who he replaced, runs through 2022, Arizona law allows an appointee to serve only until the next general election.

The move is not a surprise, with Kyl having taken a leave from a lucrative job at a Washington law firm that he took after his own term in the Senate was up at the end of 2012. The appointment to serve following McCain's death also gave Kyl, who already was shepherding the Supreme Court nomination of Brett Kavanaugh through the Senate, a chance to actually vote for him.

But it now puts Ducey in the position of having to find yet another replacement to serve until the 2020 general election.

The governor has been lobbied by some, including Senate Majority Leader Mitch McConnell, to name Martha McSally. She lost a close race last month for the state's other Senate seat to Democrat Kyrsten Sinema.

But McSally also fell out of favor among some Republicans after the Washington Post published an internal post-election memo blaming others -- and not her own campaign -- for her loss.

"A significant segment of the AZ GOP was hostile to the President,'' the memo states, saying that internal polling during the primary showed that Trump never broke 80 percent favorability among Republican voters. And she said some Arizona Republicans were "outright hostile'' to Trump and opposed to Kavanaugh's appointment.

"This segment of moderate Republicans, especially woman, proved very difficult to bring home a Republican candidate that supported President Trump and the confirmation of Justice Kavanugh,'' the memo states.

There has been no shortage of others who have been named, including Kirk Adams whose last day as Ducey's chief of staff is Friday. But Adams has told Capitol Media Services he is interested in working in the private sector. And while Adams was a state lawmaker, he has never run the kind of statewide race that would be necessary to keep the seat in GOP hands after 2020.

There also has been talk of naming Cindy McCain to the seat her husband occupied until his death.

Also on some people's short list is state Treasurer Eileen Klein, whom Ducey appointed to that post after the resignation of Jeff DeWit.