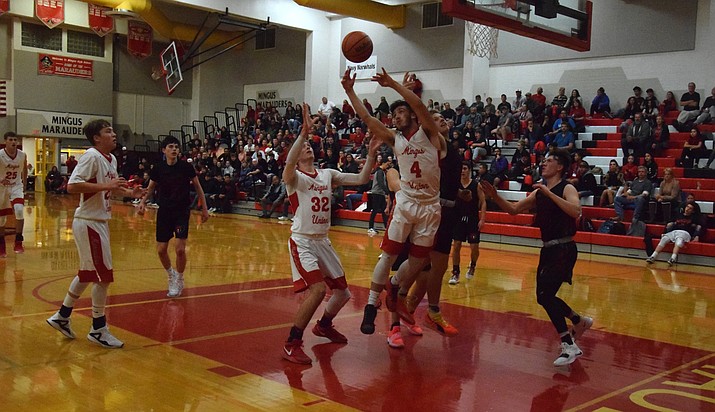 Mingus senior Mason Pacheco grabs a rebound during the Marauders’ 55-50 win over Bradshaw Mountain at home on Monday. VVN/James Kelley

“It’s a good win for us, we kinda needed it,” Mingus head coach Dave Beery said. “We’ve been so-so, I think if we had lost then all of a sudden that Coconino game becomes almost a game that we have to win to have any kind of chance to have the season we want to have. So it was good to get that win I think we were sound on defense for most of the game.”

Bradshaw Mountain had won two in a row heading into the game, dispatching Flagstaff 60-50 and Coconino 45-41.

“We know every night is going to be a battle in our region, if you don’t play well you’re going to lose I thought Mingus played really well,” BM head coach Blair Hillig said. “I’ve seen them a couple times and I don’t think that they were healthy, I think tonight they looked like they were healthy and they shot the ball well and we did not shoot the ball well from the perimeter at all but it’s a learning experience, hopefully every game you learn and you get something out of it.”

After a back and forth first half, Mingus Union built up a seven point lead after three quarters and got it up to 11 points with 3:36 left in the game.

The Bears pulled to within three points with six seconds left but the Marauders hit their free throws and held on.

“We were able to do enough to frustrate them a little bit at the end and hold onto the lead and hit some free throws, seniors stepped up and hit free throws that they’re supposed to hit,” Beery said.

Mingus Union’s win comes after they had lost three in a row, including routs at the hands of Prescott at home, 65-48 and at Deer Valley, 71-27 last week.

“You know that they’re hungry for a win and I’ve watched these kids for a long time and I knew that they could play,” Hillig said. “Unfortunately I think we probably got them on one of their better nights, which I think they’re going to continue to play that way, they’re just too good of a team and have too many good players to not continue that. But that’s just the luck of the draw sometimes, you get somebody when they’re really hungry but we got to play with that same kind of passion every night too.”

Deer Valley is ranked No. 2 and 8-0 in power point games.

“Well it’s good,” Beery said about the Marauders’ response to the Prescott and DV losses. “I think the Prescott game really shocked these guys. Deer Valley we’ve talked about for a while, we know that they’re loaded, we know that have a heck of a program, lot of talent and extremely well coached, so we really had nothing to lose there. It’s always disappointing when you’re down 22 after the first quarter (laughs) but it wasn’t like completely unexpected. The Prescott game though I think these guys thought that they were just going to show up and get a win because they’re the home team and they’re supposed to be better than Prescott in their own minds. We’re trying to tell them all year ‘every single game in our section’s going to be competitive this year.’”

For Mingus Union, senior guard Chase Saczalski, who has dislocated both shoulders this season and was sick for the Deer Valley game, had 21 points and senior forward Chaz Taylor had 11 points.

“I think it was good, I think it’s the best game we’ve had so far this year, just with all around consistency, defensive wise it was our best game and what was good (Monday) night is that we had scoring across our players across the board,” Taylor said.

The Marauders’ next home game is Jan. 8 when No. 32 Flagstaff comes to town.