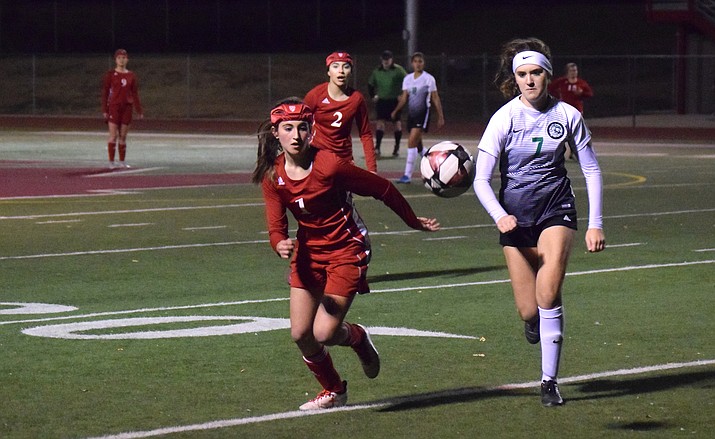 Mingus sophomore Sadie Backs runs after a loose ball during the Marauders’ 2-0 win over Youngker at home on Monday. VVN/James Kelley

Mingus Union girls soccer beat Youngker on Monday night at home to complete the first semester with a perfect record.

The Marauders (4-0-0) defeated the Roughriders 2-0 in a score line favorable to the visitors.

“We were a better team,” Mingus head coach Calvin Behlow said. “We out passed them 210-80 passes, we out shot them 19-3, better team. We should have beat that team 4-0. I rarely am this confident about a game, we dominated. They had a good punter and a keeper and a good striker up front and we just man marked her tried not to kick the ball to the keeper as much, we just happened to do it 16 times (Monday) night. My opinion was the better team truly won, which is not always the case in soccer.”

“I feel like we can always play better but we just play good enough to beat the other teams,” Arwine said.

Although the Marauders had much more possession and chances, they only scored two goals with sophomore forward Neveah Monhollen out with a concussion

“It was super frustrating, especially with girls that usually put the ball in the back of the net,” Calvin Behlow said. “Marli had a couple that you usually chalk up to goals. (Junior midfielder/forward) Felicia Bueno, she kicked nine points in field goals (Monday) night and that’s rare for her, she usually puts the ball right on frame, she hit a cross bar too. We’ve got to get better at scoring. Truly though, I had (sophomore) Natalee Rogers up front and she’s a defender by heart and I’ve been putting her up there for speed and she’s coming along but Neveah’s concussion has kept us from having that true striker up front.”

“It was untouched, ball floats in, Jasmine puts a head on it, goes in the back of the net, I mean that’s text book soccer, so when we focus and do the right things, we’re deadly, we score good goals,” Calvin Behlow said.

The Marauders’ dominant start comes after they went 2-4-1 during the fall semester last year.

The Marauders have outscored their opponents 13-2 so far this season.

After coaching the boys team the last few years, Calvin Behlow said didn’t know what to expect when he came over to the

“I never would have thought it,” Calvin Behlow said about the undefeated start. “I mean I don’t know what to expect, I never coached girls. I can look at a boys team and say ‘well this is who we play and this is who we are’ and you know that Coronado in boys is always going to be a game that you’re probably going to lose. I don’t know who we’re playing I’ve never seen a Peoria girls, never seen a Youngker girls, never seen girls teams, so I don’t know what to expect, I’m actually enjoying this year because all I do is put girls out there, tell them to play their hardest. If we win we win, if we lose we lose, there’s definitely no gamesmanship because I don’t know anybody. These are the girls I have I keep trying to win the midfield because then at least we have some offense going forward and the girls seem to be working hard doing that.”