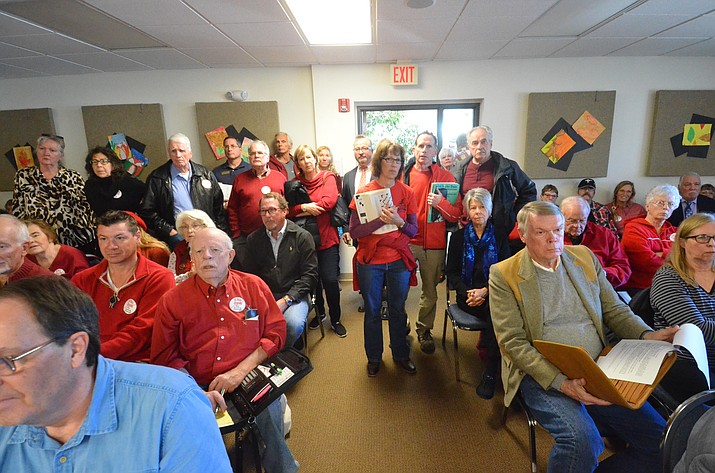 The tower would be disguised to look like a eucalyptus tree, according to staff documents.

AT&T, the applicant for the project, was also granted a request to waive an ordinance requiring wireless facilities be built outside 1,000 feet of homes.

The project is meant to help communication between first responders, according to staff.

The Sedona Fire District submitted a letter to the county in support of the project.

Michael Campbell spoke at the meeting on behalf of the At&T.

“The site is part of the FirstNet project so first responders can communicate on the same frequency,” he said. “It’s a nationwide program.”

Many neighbors spoke in opposition of the project citing concerns that cell phone towers degrade property values. Sprint already has a cell tower near the same location inside a flagpole.

John Black, who lives within 1,000 feet of the proposed site, said the project violates Yavapai County Ordinance. He was also the neighbor who requested the tower be reduced from 100 feet to 80 feet.

“I’m not opposed to a cell tower,” he said. “This particular site is not appropriate.”

But Campbell said their options are limited and they aren’t permitted to build cell towers on National Forest land.

Other speakers said the eucalyptus disguise is an eyesore.

Commissioner Sandy Griffis asked the developers on the project to research other camouflage options.

“The broad leaf look is so not Sedona,” she said. “Do you have anything else that’s more flora and fauna?”

P&Z voted to recommend the County Board of Supervisors approve the project. Kevin Osterman was the single nay-sayer. He cited issues with violating county zoning ordinances.

Griffis assigned the applicants some homework.

“Mr. Campbell, when you go to the Board of Supervisors, do some research on another tree. This one is not good,” she said.

She also asked Campbell to research possibilities into a colocation with the Sprint tower instead of using a brand new site.