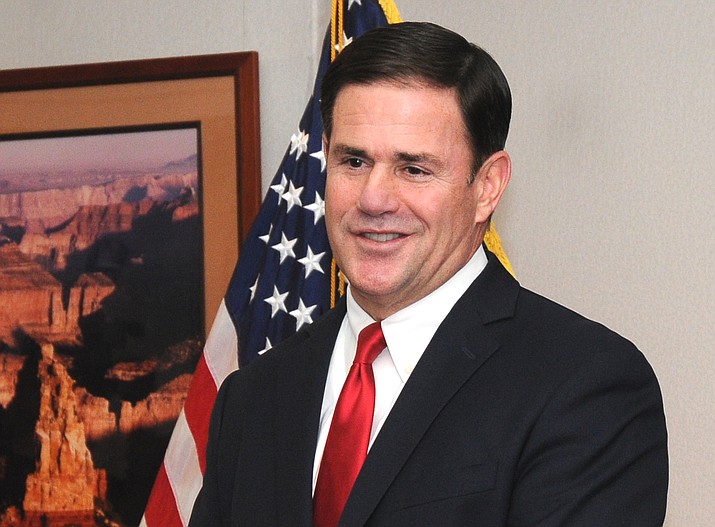 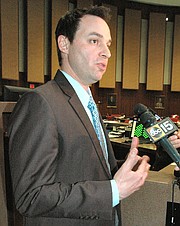 PHOENIX -- Gov. Doug Ducey wants to boost the taxes paid by Arizonans by $180 million -- or more -- when they file their tax returns this spring.

But he insists it’s not a tax hike.

Instead, it’s part of the governor’s plan to conform Arizona’s tax code to changes enacted in federal law.

Those changes took effect last year. More to the point, they are reflected in the new federal income tax forms that people across the country will be filling out between now and April 15.

Conforming to those changes, like what’s deductible, makes it easier for Arizonans to prepare their own taxes so they don’t have to make additional calculations.

And that extra cash? Ducey proposes to add it to the state’s “rainy day fund,’’ a special savings account for emergencies and for lawmakers to tap when there is a sudden unexpected drop in revenues.

That account now stands at about $460 million, less than 5 percent of the state general fund budget.

“It’s anything but that,’’ said the Chandler Republican. “It’s a tax increase and the largest one in modern history.’’

Mesnard points out that Ducey’s plan would increase the taxes Arizonans owe, as they no longer could take those tax deductions they have been using for years. And fewer deductions, quite simply, means a more expensive bottom line for many.

That, said Mesnard, is an unfair “windfall’’ for the state at the expense of its residents.

While Mesnard won’t be speaker this coming session he will still have an important voice in whether the governor gets his way. He will be chairing the Senate Finance Committee, through which all tax bills, including Ducey’s proposal, are supposed to pass.

What’s behind all this is that, under current Arizona law, taxpayers use the federal definition of “income’’ as the starting point for state tax forms. That’s the figure on line 37 of the federal Form 1040.

And in most cases, the deductions allowed under state law mirror those permitted under federal law.

But the measure approved by Congress earlier this year allows fewer deductions and subtractions.

For example, the new federal law caps deductions for state and local taxes paid at $10,000. If Arizona conforms, the state Department of Revenue figures that change alone will boost taxes paid by residents here by $77 million.

And there issues with smaller effects overall -- but potentially big dollars for the taxpayers involved.

One of those is that federal law no longer allows taxpayers to subtract from their income their out-of-pocket expenses for moving to take a new job. The Department of Revenue estimates affected taxpayers will be hit up to the tune of $2.8 million.

But to prevent a hit to taxpayers, Congress and the president did something that is not in Ducey’s plan: : Offset the reduced deductions.

Second, it increased the standard deduction for individuals from $6,350 to $12,000, and double that for couples filing jointly. That makes the loss of federal deductions less painful as more taxpayers will find it unnecessary to itemize.

But Ducey would leave Arizona income tax rates where they are now, ranging from 2.59 to 4.54 percent depending on income.

The bottom line is that Ducey’s conformity plan would cost taxpayers anywhere from $180 million to $200 million.

“The feds did not pass this as a windfall to state governments,’’ Mesnard said. “They passed this to be a windfall for taxpayers and we’re undermining that.’’

Mesnard said Arizona lawmakers should consider doing what the feds did to keep taxes from going up here, including decreasing tax rates, adjusting the tax brackets and increasing the state standard deduction.

He also charged that Ducey purposely waited until the last minute -- right before state tax forms are set to be printed and mailed out -- to corral lawmakers into approving his plan.

He points out the conformity issue has been no secret. In fact, Mesnard told Capitol Media Services last January that the governor should come up with a plan, while there was plenty of time to consider the options.

That plea was rebuffed, with Ducey aides insisting at the time there was more than ample opportunity to craft a plan.

Yet as recently as October -- as Ducey was running for reelection -- the governor would not answer questions from Capitol Media Services about his plans for tax conformity and whether he would increase state tax collections. By contrast, Democratic candidate David Garcia supported a revenue-neutral plan to ensure that Arizonans paid no more in state taxes due to changes in the federal law.

Ptak denied that unveiling Ducey’s plan just before tax forms are ready to go out is part of a plan to back lawmakers up against a time deadline.

He also said that his boss is willing to consider eliminating the tax hike -- eventually. But Ptak said any such change would affect only the 2019 income taxes that are due in early 2020.

Mesnard, however, said he’s not convinced that once the state starts taking more dollars from its residents that it will ever give them up.

“If the end result of his administration is that everybody in Arizona is paying more in taxes than they were before he came in, I don’t want that to be my legacy,’’ he said of Ducey. “That’s why I’m going to fight against it.’’