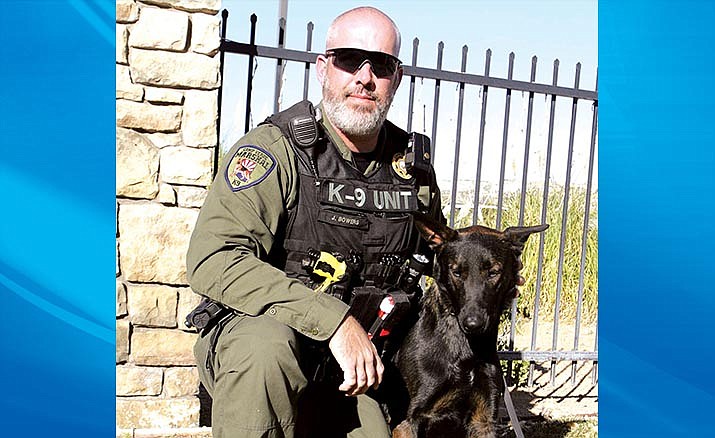 Dep. Jeff Bowers with Badge, the K-9 officer who is being trained to replace Claymore, who will retire from the Camp Verde Marshal’s Office. VVN/Bill Helm

CAMP VERDE – Professionalism. Accountability. Community. Excellence. That’s what policing is all about.

The Camp Verde Marshal’s office is committed to the goal of setting the P.A.C.E., according to Corey Rowley, who took over as Marshal on Oct. 15.

Since he introduced P.A.C.E. to the community and to the Marshal’s Office, Marshal Rowley has “already seen an increase of people giving positive feedback about the increased efforts to get out into the community and visit multiple groups who have welcomed us with open arms.”

And the Marshal’s Office plans to continue these efforts, Rowley said.

“We are excited to meet with the new council and provide opportunities for them to have closer ties with the Marshals office by creating a Marshal’s Community Committee,” Rowley said. “This will be rolled out soon so details will follow.”

P.A.C.E. is one of the things that Rowley said he is pleased with as 2018 comes to a close. As he arrived from the Yakutat, Alaska Police Department that he led since 2016, Rowley took over for Commander Brian Armstrong, who served as interim marshal since October 2017.

Besides the PACE program’s implementation, the Camp Verde Marshal’s Office looks back at the following successes in 2018:

According to Commander Armstrong, the reclassification of the corporal to sergeant position – and the promotion of Tom Baizel to sergeant – allowed each patrol team to be supervised by a sergeant.

Other successes in 2018 at the Camp Verde Marshal’s Office include:

• A new dual purpose patrol/narcotics canine, Badge, to prepare for the retirement of Claymore, who is nearing the end of his service;

• Upgraded the part-time records clerk to a full-time position, which provided for better coverage and work load management in records department;

• A contract with a new vendor for body cameras to upgrade current cameras with a system better compatible with our CAD/RMS system to reduce work required by deputies with better quality camera equipment.