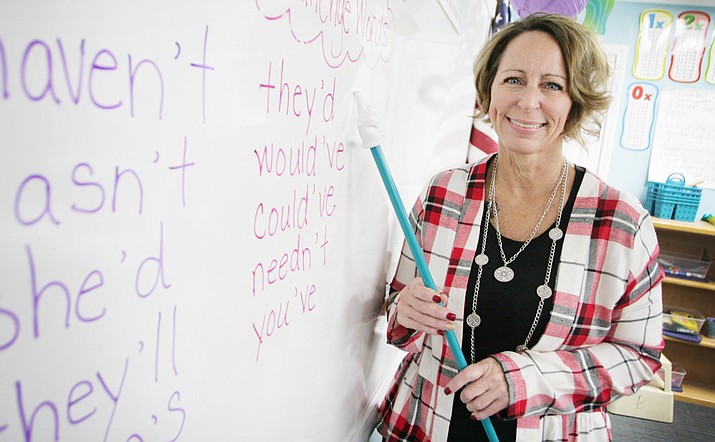 Wendy Hutchinson has taught at Camp Verde’s American Heritage Academy for 12 of her 16 years in the classroom. VVN/Bill Helm

CAMP VERDE – For Wendy Hutchinson, teaching is about victories.

For the school’s principal, the victory is that Hutchinson is one of her teachers.

“Mrs. Hutchinson has many strengths, but one that sticks out to me is her optimism,” said Stephanie Young, principal at the Camp Verde charter school. “She is always very positive, and she believes that every student in her class will be successful academically. Mrs. Hutchinson makes learning fun and exciting while encouraging her students to always do their best.”

It was in high school when Hutchinson first considered a life in education, though it wasn’t until “many years later” when she earned her teaching degree.

In her second year back at the Camp Verde school, Hutchinson has been an educator for the past 16 years. She worked at the school her first 10 years, then went to Camp Verde United Christian School before she returned to the charter school.

For Young, who is new to the school this year, she knew that Hutchinson was special “from the first day I met her.”

“She came into my office with a huge smile, but yet a little nervous being the first time we were meeting,” Young said. “And she was meeting the new principal. But after ‘hello,’ it was automatic comfort, almost like we already knew each other. We began talking and she was so kind-hearted, open minded and passionate. I could tell that she had a strong passion for teaching.”

Wendy Hutchinson: “I use several different teaching styles depending on the subject I am teaching. I really love for the students to be able to discover answers and information for themselves. Problem Based Learning), Engineer Design Process, and the five C’s – Collaboration, Communication, Creativity, Critical and Computational Thinking – are ways that we can accomplish this in the classroom. We do a lot of group work.”

VVN: What would you say is the most challenging part of teaching?

Hutchinson: “The most challenging part of teaching for me would probably be the things I wish I could change for my students, but can’t. Because I spend so much time with them, they become like my own children.”

VVN: Do you have a favorite quote?

Hutchinson: “’Every child has to potential for growth.’ I’ve been astounded at the accomplishments of students who most thought would not be successful. If you keep the bar raised high enough and foster a growth mindset, they can achieve great things.”

VVN: Tell us something most people don’t know about you.

Hutchinson: “In our classroom we celebrate mistakes. I tell my students, ‘If you didn’t make mistakes, you wouldn’t have a reason to learn.’ I try to steer my students away from the mindset that making a mistake is a bad thing and try to give them the desire to want to find the right answer instead of give up.”