Year in Review: Mingus Union survives another change at the top 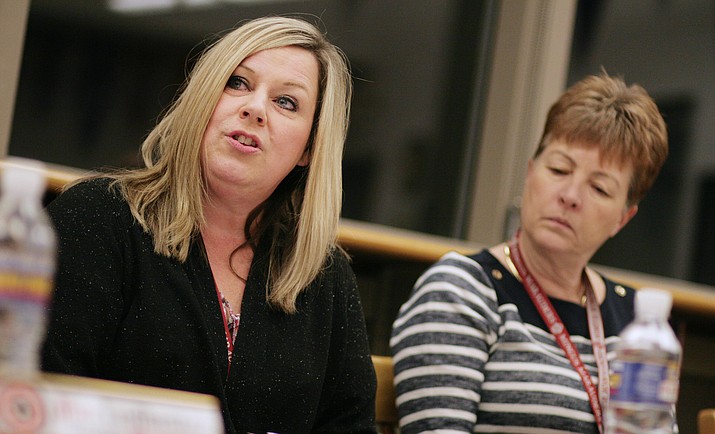 Genie Gee (left) took over as Mingus Union principal in January, then as the district’s acting superintendent in November when Penny Hargrove resigned as superintendent on Nov. 10. VVN/Bill Helm

COTTONWOOD – For the 12th time in 18 years, Mingus Union High School has a new district superintendent.

Penny Hargrove, who the district’s governing board unanimously selected from a pool of four finalists in 2017, served as the district’s superintendent for less than 17 months before she resigned while on administrative leave.

The board placed Hargrove on leave for what board member Jim Ledbetter called an “internal fire, a leadership failure” in handling technology problems connected to the school’s AzMERIT testing.

Mingus Union received a D in this year’s A-to-F letter grade evaluation by the Arizona Department of Education, a grade that Principal Genie Gee said “is currently under review.”

“Depending on the outcome, we may have some work to do with the state,” said Gee, who has also served as the district’s acting superintendent since Nov. 8. “But I’m confident that we can not only recover our scores, but show growth as well.”

Moving forward, Gee looks back at her promotion from assistant principal to principal in January as one of the “very exciting and most memorable moments” of 2018.

“It’s such a special place with the best staff and students,” Gee said. “We were in the midst of some big planning and being placed as principal ensured that we could see the plans through. It was a very proud moment for me.”

It wasn’t just her promotions that Gee celebrated in 2018, as her first graduation as the school’s principal “was very special.”

“It was the graduation of our Gear Up cohort and we recognized the work of the students and their amazing coordinator, Gretchen Wesbrock,” Gee said. “It was a night of reflection and celebration.”

“So deserving,” Gee said of the school’s second Teacher of the Year in the past three years. “The banquet is always such a special night of celebrating education in Yavapai County. A very special night.”