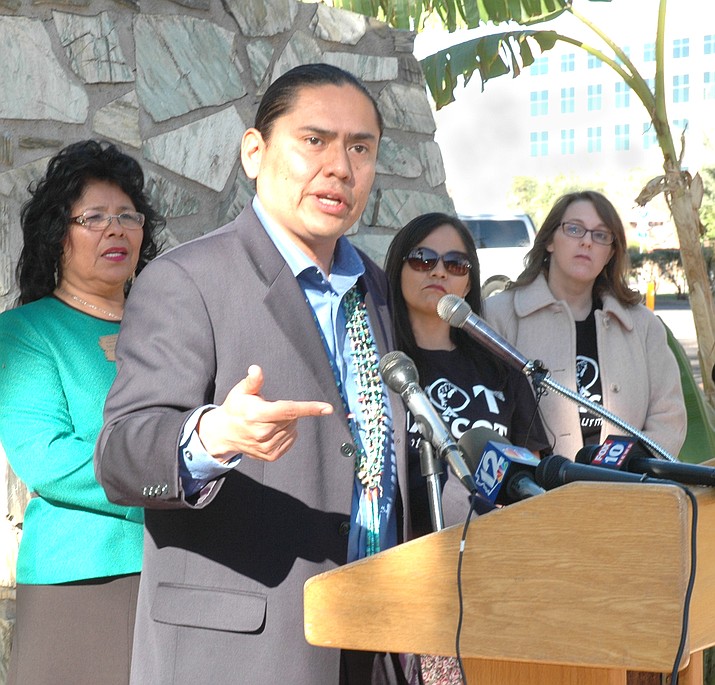 Rep. Eric Descheenie details his legislation Wednesday which would bar publicly funded stadiums, civic centers and similar facilities from displaying any name or logo that any one of the state’s 22 tribes finds "disparaging." (Capitol Media Services photo by Howard Fischer)

PHOENIX – A Native American lawmaker wants a new state law to forbid the display of any name or logo of any sports team at any publicly funded stadium if any of the state’s 22 tribes finds it “disparaging.”

The legislation by Rep. Eric Descheenie, D-Tuba City, is aimed primarily at the Washington Redskins. But Descheenie said his bill might also could affect other professional and college-level teams who have mascots or names that tribes consider offensive.

On Wednesday, Descheenie said he believes HB 2499, if approved, will pass constitutional muster. The key, he said, is that the only conduct that will be prohibited are those actions taken on behalf of the government that owns the facilities.

“Fans can continue to wear, display and say what they want,” he said. He also said that nothing prohibits the Washington team from continuing to use what he calls “the R word” as its name or mascot.

What it would do is keep that word and logo — and others that might fall in the same category — from being displayed anywhere in the stadium, whether on the scoreboard, on the giant TV screen or even on any banners mounted in and around any stadium or multipurpose facility “acquired, constructed, financed, leased or maintained with public money.”

That, by definition, goes beyond the University of Phoenix stadium where the Cardinals play, extending to Chase Field in downtown Phoenix, various spring training sites, as well as facilities at or operated by the state’s three universities or community colleges.

And that ban would extend beyond sports events to also cover trade shows, meetings and even concerts at any of those same facilities.

“This is not about free speech,” Descheenie said.

He said the First Amendment protects only the rights of individuals and companies to say what they want. Descheenie insists that the First Amendment does not cover situations in which the government is using its resources to make a statement, and he says that is what happens when the word “Redskins” appears on a display at a facility that is owned, run or financed by taxpayers.

The legislation drew the support of Amanda Blackhorse, a member of the Navajo Nation who attempted to get the U.S. Patent and Trademark Office to cancel the registration of the “Redskins” name. That effort ultimately failed after the U.S. Supreme Court said the provision of federal law allowing cancellation of offensive names runs contrary to the First Amendment.

“So while our children suffer, non-Natives can feel good about their sports team,” Blackhorse said. “There’s something very wrong with that.”

Descheenie acknowledged that his legislation, as crafted, would allow the council of a single Arizona tribe to make the unilateral decision of what terms are “disparaging” and impose that decision on publicly funded stadiums statewide. But he was unapologetic for that.

“If one tribe is offended, that’s one too many,” Descheenie said.

Still, he conceded that all tribes may not agree on what words are disparaging.

That kind of difference arose more than a decade ago amid efforts that eventually renamed Squaw Peak in Phoenix to Piestewa Peak to honor Laurie Piestewa, the first Native American woman soldier to be killed in combat. Not all tribes found the word “squaw” to be derogatory.

And there are other implications. For example, Descheenie said his legislation could permit a tribe to decide that the term “Indian” — what Christopher Columbus mistakenly named the native people he found upon arriving in America — is disparaging.

The Cleveland baseball team has been under fire because of the Chief Wahoo logo. The team has agreed to retire that logo though it will remain on some sports gear.