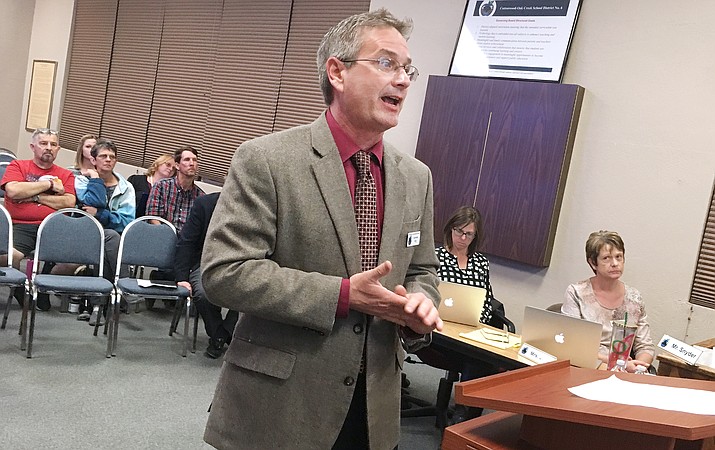 COTTONWOOD – Steve King said Tuesday that the Cottonwood-Oak Creek School District’s proposal to restructure three of its schools is “not my idea.”

“This is our idea,” the district superintendent said of a plan to remake Cottonwood Middle School and Dr. Daniel Bright into K-8 schools, and to repurpose the Cottonwood Elementary School campus.

The Cottonwood-Oak Creek school board voted 5-to-0 Tuesday to support King’s recommendation to realign the three schools.

Immediately following the vote, the board agreed to set up a study session – currently unscheduled but likely in the next seven days – to further discuss details of the restructuring, which according to King’s proposal would include co-principals at one school and an early childhood education center at Cottonwood Elementary School.

What King meant by “our idea” is that administrators district-wide worked with King to collect data and to disseminate information for what really was King’s plan for “more family-friendly schools that create greater supports.”

The campus restructuring would allow students throughout the entire district to attend the same school for the first nine years of their academic careers.

“When this was first brought to us,” said C-OC board member Janice Rollins, “I thought this was a no-brainer. I thought how wonderful this could be for families. This is an excellent idea. I wholeheartedly support it.”

Providing those “support systems” as King said actually begun two years ago when the district embraced Capturing Kids Hearts, a program that engages students through both their social and their emotional intelligence.

During King’s speech Tuesday, he eluded to the connection between the motivational program and the school realignment.

“Ninety-nine percent of education, to me, is about relationships,” King said. “Nothing is more important to me that Capturing Kids Hearts. That’s where it starts, that’s where it ends.”

The plan: as it stands, as it moves forward

The board’s approval of King’s realignment proposal means that beginning with the 2018-2019 school year, Cottonwood-Oak Creek School District will have four schools – and each will be K-8 schools.

At some point, King said, the two “new” schools will need to be given names.

And with teachers, students and administrators going from three to two schools, King said that the results of a survey showed that “72 percent of the teachers got their first choice” of campuses they would like to call their new professional home.

“It was not an easy process,” King said. “It was them, they all worked it out. From the beginning, the teachers were part of the process.”

In January, King asked the school board – and was granted – an extension of this year’s open enrollment period from, Feb. 1 to March 1.

At the time, King said he asked for the extension because families would need more time should the realignment take place.

Part of the district’s information compilation for the realignment allowed King to pre-assign the children who attend the three current schools – Dr. Daniel Bright, Cottonwood Elementary and Cottonwood Middle – to the new two schools for 2018-2019.

With the new open enrollment period date, families now have the time to decide whether they would like to sign their children up for a different school within the district, King said.

Based on preliminary boundaries, King said that about 625 children have been assigned to each of the new schools for 2018-2019, and that the district is “anticipating 5 percent more” at either school based on the possibilities of open enrollment and what each school can accommodate.

It’s common – pretty much expected – that school board members are charged with looking out for ways to stretch the district’s dollars and to save where possible. Following the presentation, Cottonwood-Oak Creek school board member Jason Finger told King that he “[didn’t] see anything” about what money the district could save in a realignment.

King said that though Finger’s question was a “valid consideration,” the interest in realigning the schools was “never about money.”

The district’s priority, according to David Snyder, director of business services for Cottonwood-Oak Creek School District, was to monitor costs to make sure “it doesn’t cost more.”

“There might be some efficiencies there,” Snyder said. “But there’s no reduction. We’re still serving the same amount of students.”

Whether the district is able to save money – or break even – was not a priority to Eric Marcus, the district’s newest board member.

Marcus, who on Jan. 16 was appointed to join the board, said that if Cottonwood-Oak Creek is able to meet King’s objectives with the realignment and just break even financially, “we’re way ahead of the game.”

“Our most important obligation is focusing on student outcomes,” Marcus said. “If it turned out that the cost was neutral, then we’ve met that fiduciary duty. What impact will this have on our students’ education? This is an important statement of who our superintendent is. I applaud him for doing this. I am extremely impressed with the degree of homework and I am impressed with what I believe this will achieve.”