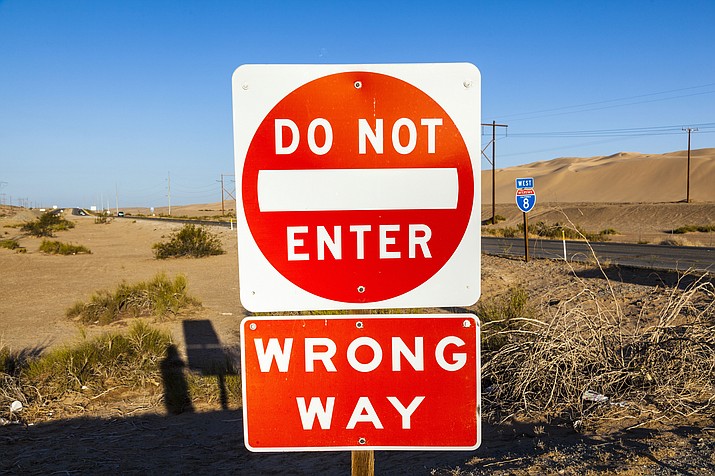 PHOENIX— Saying warning signs and detection systems may not be the right answer, a state lawmaker has a more radical approach to stopping wrong-way drivers: slicing and dicing their tires.

Rep. Michelle Ugenti-Rita wants state transportation officials to identify highway stretches that have a high potential for people driving head-on into traffic. More to the point, HB 2539 would mandate the installation of spikes “that shred the vehicle tires of any wrong-way driver.”

Her legislation comes amid what appears to be an increasing number of motorists ending up on the wrong side of divided highways.

The Department of Public Safety reported this past June that it already had 740 individual and discrete reports that year of wrong-way drivers on Arizona freeways. And between 2004 and 2014 -- the most recent figures available -- there were 245 wrong-way crashes resulting in 91 fatalities.

Gov. Doug Ducey made special mention of the issue in his State of the State speech, directing DPS to put more troopers on the highways during late-night hours to watch for wrong-way drivers and proposing stiffer penalties.

In the meantime, the Department of Transportation has erected large red-and-white signs on freeways informing drivers that if they are reading those signs they’re going the wrong way. And the agency has installed an infrared detection system along 15 miles of Interstate 17 in Phoenix.

“I just don’t think they’re very practical and economical,” Ugenti-Rita told Capitol Media Services, with a $3.7 million price tag for that stretch of I-17.

“I’m looking at a more balanced approach,” she said. “I think the spike controls are an option to be considered.”

The question remains, however, whether they would do what they’re supposed to do.

A spokesman for ADOT said his agency takes no position on legislation.

But he noted that a 2015 study done for the state —the one that resulted in the decision on the infrared detection system — also looked at what other states have done. And that included a research analysis in Texas specifically looking at spike strips, sharp barbs on springs that should fold over when a motorist is going in the right direction but remaining rigid when encountering a tire rolling the wrong way.

The results were not promising.

One big issue is that these kinds of strips, often seen in places like parking lots to prevent people from leaving without paying, are generally designed to be used where people are driving very slowly, perhaps just 5 miles per hour.

Ugenti-Rita said that’s not necessarily a problem if the spikes are placed at locations like the top of exit ramps, where motorists are going slower. And she said she’s convinced that there has to be a company that could design a spike strip that operates at higher speeds.

But the Texas study found other problems.

During testing, for example, the spikes sometimes broke. That left stubs in the road that could damage the tires of even motorists going the right way.

Ugenti-Rita conceded that could raise some liability issues for the state.

“I’m not trying to be dismissive of those concerns,” she said. “I just think there are solutions for them.”

And there was something else in the report: During testing, the spikes did not cause the tires to deflate quickly enough to prevent a vehicle from entering the freeway.

Ugenti-Rita said the problem is severe enough that the state needs to consider different -- and more economical -- solutions than the ones it already has implemented. And she said spike strips are existing technology she believes can be adapted for use on freeway exit ramps.

It isn’t just in Arizona that the technology is being weighed.

In Ohio, for example, a spokesman for that state’s department of transportation told reporters there the concept was dismissed after the agency concluded it would not work on freeway ramps.

No hearing has been set for her legislation.