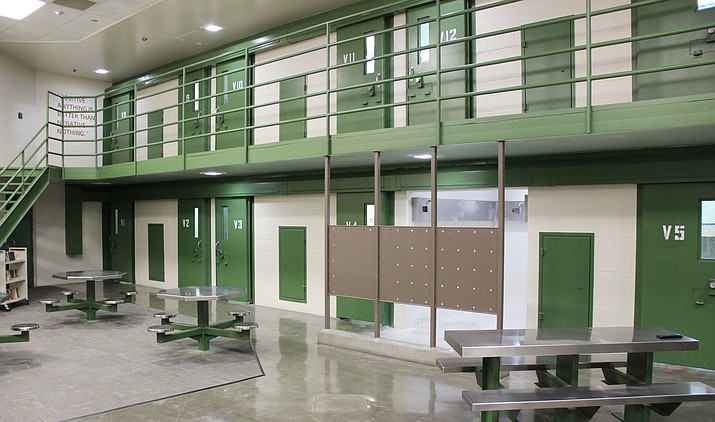 The Yavapai County Sheriff’s Office is seeking $1.5 million from the state to expand a post-arrest reentry program that is already underway at the county’s jail in Camp Verde.

The program kicked off about two years ago and initially served only those housed in the jail’s mental-health unit, a 30-bed dormitory reserved for inmates diagnosed with serious mental illnesses and willing to take medication as a part of their treatment.

The plan intended to reduce these inmates’ jail sentences on the condition that they would continue their mental-health treatment after leaving jail.

To make treatment outside the jail as accessible as possible, the jail partnered with behavioral health facilities, transitional housing programs and transportation services.

It didn’t take long before the program showed results. Among the population served, recidivism rates dropped significantly, according to David Rhodes, chief deputy at the YCSO.

“Today we have a recidivism of 19 percent to 26 percent – right in there – for a population that was probably 60 to 80 percent,” Rhodes said.

The dramatic results prompted an expansion.

“We saw that this release-to-treatment program works, so we thought, ‘what if we did this for everybody in the jail?’” Rhodes said.

Their vision was to hire people from outside of law enforcement as release coordinators and give them some basic training on how to conduct mental-health screenings. In this role, they can be one of the first contacts for inmates upon booking. And even if released soon after being booked, the person would still be connected to any needed mental-health services when he or she left the detention facility.

The YCSO has already received grant funding and other monetary support from various agencies to begin this more comprehensive program on re-entry support for the mentally ill and intends to have release coordinators working in the program this month.

However, the current funding is only enough to hire four release coordinators to cover about 18 to 20 hours per day over the next year.

If the requested $1.5 million in additional funding is provided by the state, the jail will be able to hire enough release coordinators for 24/7 coverage for three years, Rhodes said.

“If this works, the state can be involved in controlling the flow to their own prison system at the beginning of the criminal justice system, so they stand to benefit financially and otherwise,” Rhodes said.

Additionally, if the pilot program is successful, it could serve as a model to be replicated by every jail in the state, Rhodes said.

Silvernale said the bill is still undergoing committee review in the state senate. If approved there, the bill will have to go to the senate floor for approval and then to the state House of Representatives.

“I don’t anticipate to hear anything until at least September,” he said.