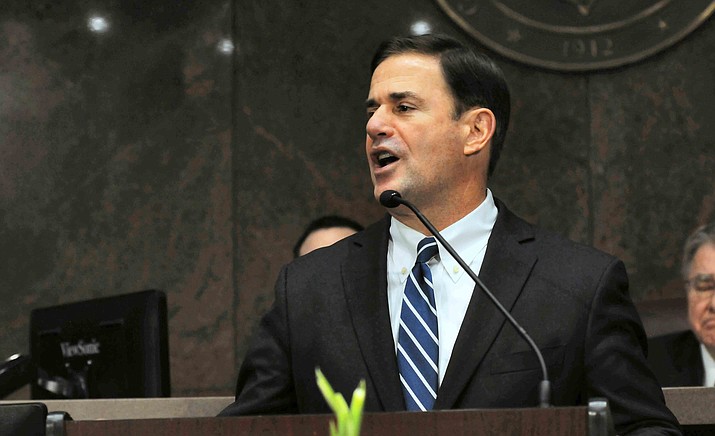 PHOENIX — The state’s largest electric utility and its top executives are funneling money into campaigns to ensure that Doug Ducey remains governor for another four years.

Pinnacle West Capital Corp., parent company of Arizona Public Service, has donated $10,200 to the Ducey for Governor campaign through its political action committee. That’s on top of $5,100 that CEO Don Brandt has given to the same committee and an identical amount to the separate Ducey Victory Fund.

Brandt’s wife, Ginger, has put her own $5,100 into the Ducey for Governor fund.

And Robert Aiken, another VP, put in $1,000 to help the governor get reelected.

But the biggest donation does not show up in state campaign finance reports: Pinnacle West has given $100,000 of corporate money directly to the Republican Governors Association.

What’s important about that donation is that the RGA then can turn around and use money from its war chest to help influence the election.

It did precisely that in 2014 when it put nearly $5 million into campaign commercials attacking Democrat Fred DuVal, making it the single largest source of funding that secured Ducey’s win.

The dollars found in reports so far represent what is publicly required to be disclosed. What is not known is whether Pinnacle West is giving money to other groups to help influence Arizona politics.

The extent of that spending is precisely the focus of the lawsuit now playing out in Maricopa County Superior Court.

What is known is that two “dark money’’ groups spent $3.2 million in 2014 to help elect Republicans Doug Little and Tom Forese to the Arizona Corporation Commission, the organization that sets utility rates. But the groups, Save Our Future Now and the Arizona Free Enterprise Club, have refused to disclose their donors, saying that’s not required because the Internal Revenue Service classifies them as “social welfare organizations.’’

APS, for its part, will neither confirm nor deny that either it or Pinnacle West was the source of those dollars.

Since then, Commissioner Bob Burns has tried to question corporate executives about the spending, arguing that it is relevant to the panel’s 4-1 vote last year allowing APS to collect an additional $7 million a month from customers. When APS balked, Burns took his case to Judge Daniel Kiley who has yet to rule on the issue.

Pinnacle West was more up front in the 2016 campaign, admitting it spent $4.2 million to ensure the utility regulatory commission remained an all-Republican affair.

J.P. Twist, who runs the governor’s reelection effort, said there’s a legitimate reason that Ducey has two separate campaign committees: It gives people a chance to give twice and not run afoul of campaign finance limits.

What that means, said Twist, is someone who wants to give Ducey, say $10,000, can have that first $5,100 go directly to the governor. Anything above that, he said, is given to the Arizona Republican Party which then can use the dollars for things to help the governor and other GOP candidates, like get-out-the-vote efforts.

Twist acknowledged the state party has its own fundraising efforts. But he said there’s a reason for having the cash raised under Ducey’s name.

“Having the governor’s name attached to it helps raise money,’’ said.

But Twist denied that’s an additional financial way of currying favor with Ducey.

“That’s not at all how it works,’’ he said. “You’re assuming somehow donating money gives you influence in the Ducey administration, which would not be accurate.’’

As to the spending for this year’s election, company spokeswoman Jenna Rowell isn’t answering questions.

“We don’t discuss individual contributions,’’ she said in a prepared statement in response to questions from Capitol Media Services. “In general, we support candidates we believe will continue Arizona’s economic growth.’’

But the company’s written policy spells out that, in general, it may support candidates and organizations that “share an interest in public policy that furthers our business objectives and promotes our mission of creating a sustainable energy future for Arizona.’’

“The company’s contribution decisions are based on what is in the best interests of Pinnacle West and not based on the personal preferences of our executives,’’ the policy reads.

And Rowell said that all contributions are funded by Pinnacle West shareholders and not APS customers.

Pinnacle West is apparently interested in some other races. For example, it has so far given 50,000 of corporate dollars to the Republican Attorneys General Association.

As in the governor’s race, those funds run through the national committee can come back to influence what happens in Arizona. That’s what happened in 2014 when RAGA spent more than $3 million in commercials attacking Democrat Felicia Rotellini, helping to elect Republican Mark Brnovich.

The spending by Brandt and his wife is not limited to seeing Ducey spend another four years as the state’s chief executive.

The pair have together put $5,400 into helping former state Sen. Debbie Lesko win her bid for Congress. She is running in the special election to replace Trent Franks who stepped down late last year in the wake of sexual harassment allegations.